Libby is a city in northwestern Montana, United States and the county seat of Lincoln County. The population was 2,775 at the 2020 census.

Libby suffered from the area's contamination from nearby vermiculite mines contaminated with particularly fragile asbestos, leading to the town's inclusion in the United States Environmental Protection Agency's National Priorities List status in 2002 and Public Health Emergency event in 2009. Most risk was reduced by 2015.

Local natural features such as the Kootenai Falls have attracted tourism to the area and have been featured in movies such as The River Wild (1994) and The Revenant (2015). There is a public school district and a public library, and the town is in-district for Flathead Valley Community College, which operates the Lincoln County Campus there.

Libby is located along U.S. Route 2.

U.S. Route 2 and Highway 37 meet at a traffic light in the center of town.

Libby Airport is a public use airport 7 miles south of town. 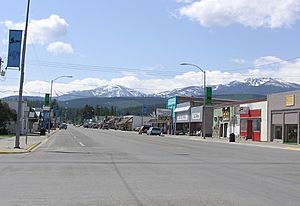 Libby's economy had been largely supported in the past by the use of natural resources such as logging and mining. Mining and timber mills have since closed down. Tourism is playing an increasing role in the local economy. The Libby Dam is 17 miles (27 km) upstream from Libby, one of the Columbia River Treaty Dams, finished in 1975. Libby is known as the "City of Eagles". Several eagle sculptures can be found around town, including a 60-foot (18 m) eagle at both ends of town.

In 1961, area volunteers opened the Turner Ski Area about 20 miles north of Libby. Owned by a nonprofit foundation, the Ski Area served around 4,600 visits per year in 2017/2018 and relies on volunteer hours and donations for most of its services. In the mid-1980s, a major ski resort was proposed for Great Northern Mountain, twenty miles (30 km) south of Libby. Discussions on land usage and wildlife reached the United States Senate Committee on Energy and Natural Resources in the Subcommittee on Public Lands and Reserved Water, and ultimately the ski resort was not built.

Libby's energy usage includes or potentially includes multiple renewable resources: biomass, hydroelectric, and solar. In 2008, a report found that wood pellet waste from nearby lumber mills could be used to produce several megawatts of electricity. The Flathead Electric Co-op began purchasing up to 2.5 megawatts of power from the F.H. Stoltze Land & Lumber Company in 2013 with a twenty year contract, leading to the construction of "a biomass-fueled electric generation facility at their plant near Columbia Falls." The Co-op "receives Renewable Energy Credits." The city also generates and sells hydroelectric energy. In 2020, a statewide appraisal of Montana public schools' solar power potential, the Montana Community Solar Project, assessed Libby's schools and found the buildings had good potential, but installing solar panels would be financially inefficient as the schools' "electric demand charges [were] in the 92nd percentile when compared against the cohort of 25 schools."

In 1919, vermiculite was discovered in the mountains near town. In 1963 W. R. Grace and Company bought the local mine, by which time it was producing 80% of the vermiculite in the world. Because the local vermiculite contains asbestos, and the mine's byproducts were used in local buildings and landscaping, the town suffered from an extremely high rate of asbestosis. Nearly 10% of the population died from asbestos contamination, and the federal government later charged company officials for complicity. On May 8, 2009, W.R. Grace & Co. was acquitted of charges that it knowingly harmed the people of Libby. It was also acquitted of subsequently participating in any cover-up. Fred Festa, chairman, president and CEO said in a statement, "the company worked hard to keep the operations in compliance with the laws and standards of the day." In 2004, Libby, Montana, a documentary on the situation, was released.

On June 17, 2009, the EPA declared its first public health emergency, which covered Libby and nearby Troy. It had provided an additional $130 million in cleanup and medical assistance. The 2010 Patient Protection and Affordable Care Act includes a provision which provided Medicare coverage to individuals of such public health emergencies.

By 2015, the U.S. Environmental Protection Agency (EPA) was concluding the removal of asbestos-contaminated soils and other suspect materials in and near Libby and had spent $425 million in Superfund money on cleanup. That year, an EPA review of toxicity and risks found that the cleanups had managed asbestos exposure risk effectively. By the end of 2018, the EPA had removed "more than one million cubic yards of contaminated soil," and area cleanup was completed that year, except for the location of the former mine, which is the disposal site of the contaminated soil. Contaminated construction materials were disposed of "in a specially designed landfill cell." The remaining contamination is limited to the forests and property in or near the former mine, with cleanup plans pending and with controls for higher exposures during wildfire fighting.

In 2020, the EPA transferred control of the site to the Montana Department of Environmental Quality. The same year, the local Center for Asbestos began offering testing for autoimmune markers for pleural disease, which would act as an early screen for at-risk patients.

Libby's lesser known second EPA Superfund site is the Libby Ground Water Contamination site at a former lumber and plywood mill which ceased operations in 1969. The mill's disposal practices and spills contaminated the soil, surface water, and groundwater with chemicals including pentachlorophenol, which the EPA discovered in nearby well water in 1979. Site reviews are held every five years, and as of 2020, several controls are in place to prevent contact with and consumption of contaminated materials.

Libby has a public library, a branch of the Lincoln County Public Libraries. Established in 1920 after residents petitioned the Board of County Commissioners, the county free library first operated out of the former Libby Woman’s Club building. The Woman's Club had formerly sponsored a small library of two thousand books for Libby citizens, and members of the Woman’s Club voted to donate the collection to kickstart the new library's circulating collection. The library moved buildings for the next few decades until its current building, the Inez R. Herrig building, was built in 1964. Branches were established in other county towns, and from 1956 to 1974, a bookmobile served smaller areas. The library now provides programming for children and adults and online services such as mobile data hotspots for borrowing.

All content from Kiddle encyclopedia articles (including the article images and facts) can be freely used under Attribution-ShareAlike license, unless stated otherwise. Cite this article:
Libby, Montana Facts for Kids. Kiddle Encyclopedia.