The Lincoln Cliff or Lincoln Edge (also known as the Trent Cliff) is a portion of a major escarpment that runs north–south through Lindsey and Kesteven in central Lincolnshire and is a prominent landscape feature in a generally flat portion of the county.

The scarp is formed by resistant Jurassic age rocks, principally the Lincolnshire Limestone Formation, and is remarkable for its length and straightness. However it is modest in height, rising about 50 metres or less above the surrounding landscape. It runs for over 50 miles from the Leicestershire border near Grantham to the Humber Estuary, and is broken only twice by river gaps at Ancaster and Lincoln, through which the rivers Slea and Witham respectively flow.

To the west of the Cliff north of Lincoln lies the River Trent, with the valley of the Witham to the west south of Lincoln. The top of the Cliff is followed by two historically significant roads. Closely following the escarpment is an ancient trackway, loosely known as the Jurassic Way, which in large parts now consists of the A607 south of Lincoln and the B1398 to the north. The second road is the Roman Ermine Street that runs parallel a few miles to the east of the Edge.

North of Lincoln, the name Lincoln Cliff, or simply the Cliff, is locally used to refer to the entire ridge of Jurassic Limestone, not just its steep western scarp. This can be seen in placenames such as Welton Cliff, Saxby Cliff and Caenby Cliff, reflecting parish-based divisions of the ridge. This use of the name is not found south of Lincoln, where the term Cliff refers only to the scarp itself, as distinct from the limestone plateau (which is here called the Lincoln Heath). To minimise confusion, some people prefer the name Lincoln Edge or Lincolnshire Edge for the scarp that runs from Grantham to the Humber, reserving the name Lincoln Cliff for the section of limestone ridge north of Lincoln.

One of several west-facing scarps within the county, Lincoln Cliff or Edge is formed from a series of sedimentary rocks which dip very gently to the east. The older rocks to the west of the scarp are of Early Jurassic age whilst those to the east are of Middle Jurassic origin;

Parts of this sequence of rocks have gone by different names in the past indicated above by italicised names in brackets, and these continue to be found in older geological literature and maps. The Charmouth Mudstones form the lower ground to the west and the lowest part of the 'cliff' whilst the Lincolnshire Limestone forms the plateau surface to the east of the scarp.

The two gaps in the ridge at Lincoln and at Ancaster are interpreted as indicating the former course of the eastward flowing proto-Trent. The river flowed from the Nottingham area towards the North Sea via the Vale of Belvoir and the gap in the ridge at Ancaster. At a later stage it used the Lincoln Gap before assuming its present northerly course to join with the Yorkshire Ouse to form the Humber. 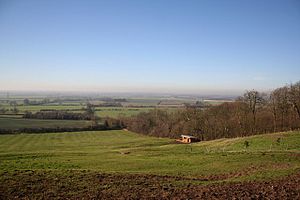 From north to south the 'cliff villages', many of them spring-line villages, are as follows:

All content from Kiddle encyclopedia articles (including the article images and facts) can be freely used under Attribution-ShareAlike license, unless stated otherwise. Cite this article:
Lincoln Cliff Facts for Kids. Kiddle Encyclopedia.