List of colleges and universities in North Dakota facts for kids 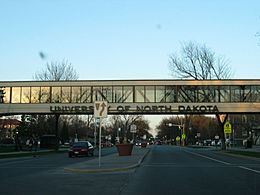 University Avenue towards the University of North Dakota in Grand Forks

The majority of North Dakota's post-secondary institutions are accredited by the North Central Association of Colleges and Schools (NCACS) (19 in total). Most are accredited by multiple agencies, such as the Commission on Collegiate Nursing Education (CCNE), the National Council for Accreditation of Teacher Education (NCATE), the National League for Nursing (NLNAC), the American Psychological Association (APA), and the American Dietetic Association (ADA).

In addition to those currently in operation, there are three now-defunct institutions which were located in North Dakota:

There is one notable fictitious university in North Dakota:

All content from Kiddle encyclopedia articles (including the article images and facts) can be freely used under Attribution-ShareAlike license, unless stated otherwise. Cite this article:
List of colleges and universities in North Dakota Facts for Kids. Kiddle Encyclopedia.