Fort Yates is a city in Sioux County, North Dakota, United States. It is the tribal headquarters of the Standing Rock Sioux Tribe and county seat of Sioux County. Since 1970 the population has declined markedly from more than 1100 residents, as people have left for other locations for work. The population was 184 at the 2010 census.

A primarily Native American settlement developed here after a US Army post at this site was established in 1863 as the Standing Rock Cantonment, intended for the US Army garrison to oversee the Hunkpapa and Blackfeet bands, and the Inhunktonwan and Cuthead of the Upper Yanktonai, of the Lakota Oyate. In 1878 the US Army renamed the fort to honor Captain George Yates, who was killed by the Lakota Oyate at the Battle of Little Big Horn in 1876. The town that developed was also known as Fort Yates. The Army post and fort were decommissioned in 1903.

Fort Yates also served as the headquarters of the US Standing Rock Indian Agency, which in the late 19th century was headed by US Indian Service Agent James McLaughlin. Worried about the Hunkpapa Lakota chief Sitting Bull possibly taking part in the Ghost Dance movement, he ordered the arrest of the chief on 14 December 1890. During the bungled event the chief was shot and killed at dawn in his log cabin by agency non-Hunkpapa Dakota police.

Sitting Bull was buried at Fort Yates. In 1953, his family authorized his remains to be exhumed and transferred to a gravesite overlooking the Missouri River near his birthplace at Mobridge, South Dakota. A monument dedicated to Sitting Bull was installed at his burial site at Fort Yates. Another monument, with his bust on a pedestal, overlooks the Missouri River at the Mobridge burial site.

This city has become the tribal headquarters of the federally recognized Standing Rock Sioux Tribe, whose reservation encompasses it. They founded Sitting Bull College in Fort Yates, a tribal college now named for their noted 19th-century leader. Known also as "Long Soldier", it is the most populous electoral district of the reservation.

According to the United States Census Bureau, the city has a total area of 0.06 square miles (0.16 km2), all of it land. Fort Yates has a semiarid climate (Köppen BSk), with hot summers, cold and very dry winters (though sometimes moderated by chinook winds) and substantial diurnal temperature ranges. On February 2, 1992 the city recorded 72 °F or 22.2 °C, the highest ever recorded for any winter month in North Dakota. 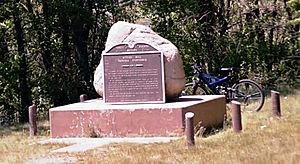 There were 66 households, of which 45.5% had children under the age of 18 living with them, 22.7% were married couples living together, 30.3% had a female householder with no husband present, 12.1% had a male householder with no wife present, and 34.8% were non-families. 28.8% of all households were made up of individuals, and 7.5% had someone living alone who was 65 years of age or older. The average household size was 2.79 and the average family size was 3.26. 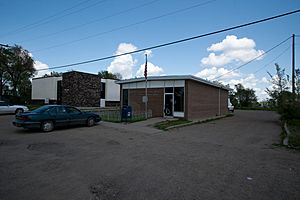 The water treatment plant at Fort Yates, an integral part of the The Standing Rock Rural Water System, is the primary source of drinking water for over three thousand people which includes the residents of Porcupine, Cannonball and Fort Yates as well the Prairie Knights Casino and Lodge. The intake is on the Missouri River.

It is in the Fort Yates School District, which is integrated with the Standing Rock Community School.

All content from Kiddle encyclopedia articles (including the article images and facts) can be freely used under Attribution-ShareAlike license, unless stated otherwise. Cite this article:
Fort Yates, North Dakota Facts for Kids. Kiddle Encyclopedia.