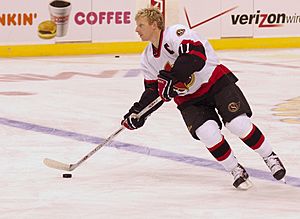 The captain can be identified by the large "C" on their jersey.

The National Hockey League (NHL) is a professional ice hockey league with 31 teams founded in 1917. Each team can select a captain, who has the "sole privilege of discussing with the Referee any questions relating to interpretation of rules which may arise during the progress of a game". Each team is also allowed to pick alternate captains, who work when the captain is not on the ice. Captains have to wear the letter "C" on their uniform to show who they are; alternate captains wear the letter "A". Both letters are 3 inches (7.6 cm) in height.

Some teams in the NHL do not have a captain. Rule 6.2 of the 2008–09 Official NHL Rulebook says that "[only] when the Captain is not in uniform, the Coach shall have the right to designate three Alternate Captains. This must be done prior to the start of the game." Many NHL teams with a captain select more than two alternate captains and change who wears the "A" for different games during the season.

Goaltenders are not allowed to be captains during games. This rule was made in 1948 after teams did not like that it took Montreal Canadiens goaltender Bill Durnan too long to skate to talk with the officials and back to his crease. However, Vancouver Canucks goaltender Roberto Luongo was the team's captain, but because of the NHL rule against goaltender captains, the league did not allow Luongo to act as captain on-ice. Because of this, the Canucks were allowed to have three alternate captains in games, instead of two that most teams have. Two (of the three) alternate captains took care of Luongo's on-ice work: Willie Mitchell (then alternate captain) talked to the officials. Luongo was not allowed to wear the "C" on his jersey, but it was part of the artwork on the front of his mask. Other than Durnan and Luongo, five other goaltenders have been captain o their team: John Ross Roach of the Toronto St. Patricks, George Hainsworth of the Montreal Canadiens, Roy Worters of the New York Americans, Alex Connell of the Ottawa Senators, and Charlie Gardiner of the Chicago Black Hawks.

When Connor McDavid was named captain of the Edmonton Oilers, he became the youngest permanent captain in NHL history. Gabriel Landeskog of the Colorado Avalanche and Sidney Crosby of the Pittsburgh Penguins, are the second- and third-youngest players to be named captain in NHL history, respectively. In 1984, Brian Bellows was named interim captain of the Minnesota North Stars when Craig Hartsburg was injured, and is the youngest player to captain a team in NHL history. However, because Bellows served only on an interim basis, McDavid retains the distinction of being the youngest permanent captain in the League's history. Mark Messier is the only player to captain two separate teams to Stanley Cup championships, those being the 1990Edmonton Oilers and the 1994 New York Rangers. Sidney Crosby also became the youngest captain to win the Stanley Cup with the Pittsburgh Penguins in 2009. The oldest permanent captain in league history was Mark Messier of the New York Rangers, who turned 43 years old, during his last NHL season, 2003–04. The longest tenure in league history was Steve Yzerman of the Detroit Red Wings, who served as captain of the Red Wings for (nineteen seasons) twenty years. 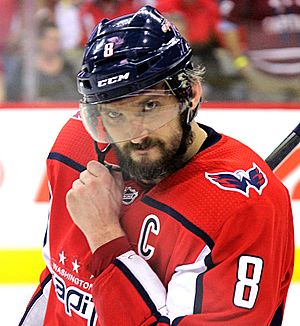 Alexander Ovechkin, captain of the Washington Capitals since 2010 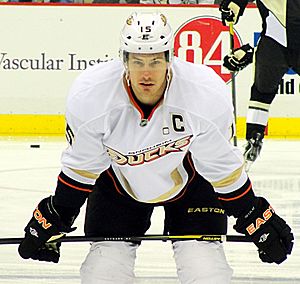 Ryan Getzlaf, captain of the Anaheim Ducks since 2010

Twenty-six of the thirty-one NHL teams currently have a captain. The five teams without a captain are the Detroit Red Wings, New York Rangers, Ottawa Senators, and the Vegas Golden Knights. Of the twenty-six captains, twenty of them have been with their team for their entire career. The current longest-tenured captain in the League is Zdeno Chara of the Boston Bruins, who has served in the role since October 3, 2006. 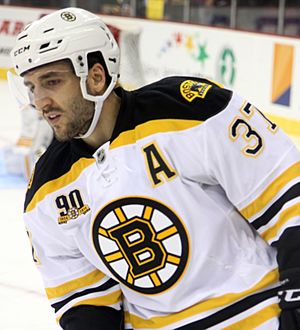 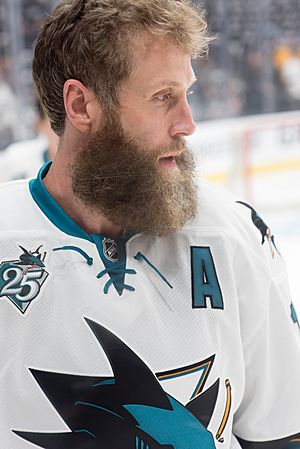 Duncan Keith, an alternate captain of the Chicago Blackhawks since 2008

Evgeni Malkin, an alternate captain of the Pittsburgh Penguins since 2008

Nicklas Backstrom, an alternate captain of the Washington Capitals since 2010

Vladimir Tarasenko, an alternate captain of the St. Louis Blues since 2016 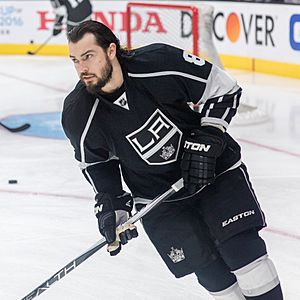 Drew Doughty, an alternate captain of the Los Angeles Kings since 2016

All content from Kiddle encyclopedia articles (including the article images and facts) can be freely used under Attribution-ShareAlike license, unless stated otherwise. Cite this article:
List of current NHL captains and alternate captains Facts for Kids. Kiddle Encyclopedia.