List of tallest buildings in Hamilton, Ontario facts for kids 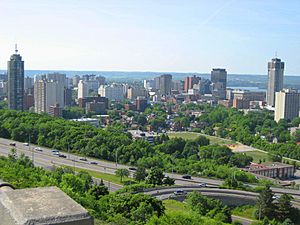 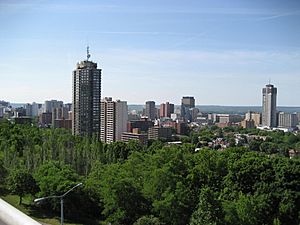 This list ranks buildings in Hamilton that stand at least 75 m (246 ft) tall, based on CTBUH height measurement standards. This includes spires and architectural details but does not include antenna masts.

Other notable buildings and structures 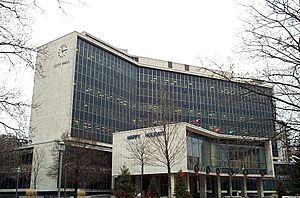 Hamilton City Hall is an 8-storey, International-style government building located in downtown Hamilton. In 2005, Hamilton City Council designated the building as a heritage structure. Among the listed heritage elements on the exterior are the Italian glass tile mosaics.

The Royal Connaught Hotel is a historic 13-storey building located in downtown Hamilton. The hotel served as the Governors meeting hall of the NHL, the site of female athlete accommodations for the 1930 British Empire Games, and a wide variety of hotels. From 2014 to 2018, it was converted to a condominium.

CHCH Television Tower is a 357.5-metre-high (1,173 ft) guyed TV mast in Hamilton, which is the primary transmitter for television station CHCH-TV.

When it was built in 1960, the CHCH Television Tower became the tallest structure in Canada. Only two structures built since then are taller within Canada: the CN Tower in Toronto and the Inco Superstack in Sudbury, Ontario. The CHCH tower ranks eighth in height among the tallest structures in the British-based Commonwealth.

All content from Kiddle encyclopedia articles (including the article images and facts) can be freely used under Attribution-ShareAlike license, unless stated otherwise. Cite this article:
List of tallest buildings in Hamilton, Ontario Facts for Kids. Kiddle Encyclopedia.