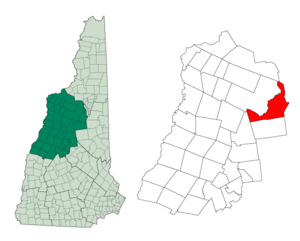 Livermore is an unincorporated civil township and ghost town in Grafton County, New Hampshire, United States. It was briefly inhabited as a logging town in the late 19th and early 20th centuries. The site of the former village is about 16 miles (26 km) west of North Conway, about 1.5 miles (2.4 km) from US Route 302 (the Crawford Notch Highway) via the U.S. Forest Service Sawyer River Road. The logging operation was established by Daniel Saunders Jr. and Charles W. Saunders, members of the Saunders family. The town was named for Samuel Livermore, a former United States senator who was the grandfather of Daniel Saunders' wife. The population was reported as 0 at the 2010 census.

To the south is Waterville Valley, to the north and west is Lincoln (and a southern tip of Bethlehem), and to the east are Hart's Location, Bartlett and the northwestern corner of Albany.

The village of Livermore was benchmarked with an elevation of 1,264 feet (385 m), a quarter mile from the eastern boundary adjoining Hart's Location.

Livermore is a long, relatively narrow township, forming a very rough approximation of a crescent with its endpoints at the north and west. Livermore and its neighbor to the west, Lincoln, occupy a large area of uninhabited woodland once known as the "Pemigewasset Wilderness" (a portion of which is preserved in the present-day WMNF Pemigewasset Wilderness in Lincoln). The original boundary between the two towns did not follow natural features, such as the crest of the divide that separates the Pemigewasset River and Saco River drainages, which led to numerous charges and countercharges of cutting over the line between the two owners, the Saunders family in Livermore and James Everell Henry in Lincoln. In addition, it was difficult to haul timber over the ridgecrest. Eventually a settlement was reached by which the New Hampshire legislature redrew the town boundary to run along the ridgecrest, with the Lincoln portion defined as that part of the territory that is drained by the East Branch of the Pemigewasset River and the Livermore portion as that drained by other rivers. This definition produced a peculiar result: there is a small piece of Livermore at the head of the Little River valley (part of the Ammonoosuc River drainage) that is not contiguous to the rest of the town - it is, in fact, 4.8 miles (7.7 km) from the nearest corner of the main part of the town. Since this fragment and all lands bordering it are now part of the White Mountain National Forest, this historical peculiarity no longer has any practical consequences.

Two roads cross the township of Livermore, although neither one is close to the site of Livermore village. The Kancamagus Highway (New Hampshire Route 112) crosses Kancamagus Pass (2,855 ft or 870 m) on the Lincoln/Livermore boundary and passes through several miles of the southeastern part of Livermore to a point just west of Sabbaday Falls. The Tripoli Road (not usually maintained for winter travel), which runs from the northern tip of Thornton through Thornton Gap to Waterville Valley, crosses the southwest corner of the township.

As of the census of 2010, there were no people living in the township.

Historical census figures are shown in the adjacent table. As a logging town where most of the actual logging was done in the winter by transient men hired for the season only, ascertaining the actual population of Livermore at any given time would have been problematic, and these census figures may have been influenced by how these transients were counted.

Diatomaceous earth—also called tripolite—was once mined in Little East Pond and processed in a mill located in the southwestern part of Livermore township. The Tripoli Road received its name from this mill. The USFS Little East Pond Trail follows for some distance the grade of the old railroad that served the mill, and the ruins of the mill can still be found by following the line of the railroad grade into the woods for a short distance. However, this mill was far from the village of Livermore and was historically more identified with Thornton.

All content from Kiddle encyclopedia articles (including the article images and facts) can be freely used under Attribution-ShareAlike license, unless stated otherwise. Cite this article:
Livermore, New Hampshire Facts for Kids. Kiddle Encyclopedia.