Hart's Location is a town in Carroll County, New Hampshire, United States. Since 1948, the town has been one of the first places to declare its results for the New Hampshire presidential primary and U.S. presidential elections.

The population was 68 as of the 2020 census. It was incorporated in 1795. Hart's Location receives services from the nearby town of Bartlett, but otherwise has its own government, selectmen and post office. Home to Crawford Notch State Park, which is noted for its rugged mountain beauty, the town is crossed by the Appalachian Trail. 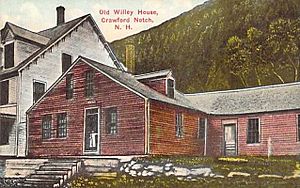 Hart's Location was named after Colonel John Hart of Portsmouth. In 1772, the land was granted to Thomas Chadbourne, also of Portsmouth. Native Americans used a trail up the Saco River valley through Crawford Notch, and during the French and Indian Wars, many English captives were taken to Canada that way. But the pass through the White Mountains was otherwise unknown until 1771, when Timothy Nash discovered it hunting moose, and told Governor John Wentworth.

The obscure Indian trail transformed into the Coös Road, on which was built a small public house in 1793. It was abandoned, but in 1825 Samuel Willey, Jr. occupied it with his wife, five children, and two hired hands. During a violent storm on August 28, 1826, they all perished in a landslide known as Willey's Slide. They fled their home and took refuge in a shelter, but it was destroyed while the house remained unscathed. A rock outcrop uphill divided the slide, which flowed around the home and reunited below it. The door was found gaping, a bible open on the table. Their tragedy inspired "The Ambitious Guest" (1835) by Nathaniel Hawthorne, and Mount Willey was named in their memory. The house became part of a larger inn, then burned in 1898. Today, the location is a state historic site.

In 1875, the Portland and Ogdensburg Railroad completed its line up through Crawford Notch. Passengers thrilled to traverse the Frankenstein Trestle, 520 feet (158 meters) long and 85 feet (26 meters) above the ravine floor, and then the Willey Brook Bridge, 400 feet (122 meters) long and 94 feet (29 meters) high. Later part of the Mountain Division of the Maine Central Railroad, the route is still traveled by the Conway Scenic Railroad. 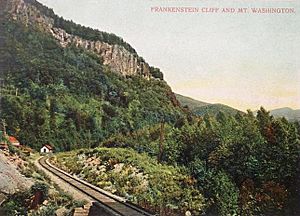 The shape of Hart's Location is unusual: about 11 miles (18 km) long and 1.5 miles (2.4 km) wide, with crooked boundaries that echo the confines of Crawford Notch, threaded by the upper Saco River and U.S. Route 302 near the centerline of the town, and pinched from both sides between steep mountains and in some areas sheer cliffs above. This anomaly is heightened on maps that show county lines: Coos County lies immediately to the east and Grafton County to the west, but Hart's Location is part of Carroll County, though barely connected to it.

The highest point in Hart's Location is 3,900 feet (1,200 m) above sea level along the town's western boundary, beneath the summit of 4,285-foot (1,306 m) Mount Willey. Arethusa Falls, New Hampshire's highest waterfall, located in the neighboring township of Livermore, is a popular hiking destination with access from U.S. Route 302 in Hart's Location. The town lies fully within the Saco River watershed.

The town is a popular ice climbing destination in the winter months.

All content from Kiddle encyclopedia articles (including the article images and facts) can be freely used under Attribution-ShareAlike license, unless stated otherwise. Cite this article:
Hart's Location, New Hampshire Facts for Kids. Kiddle Encyclopedia.