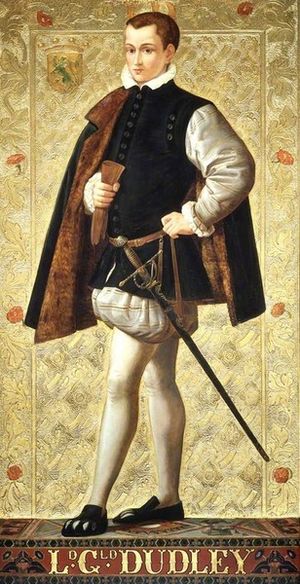 Guildford (also spelled as Guilford) was the son of John Dudley, the Earl of Warwick and later Duke of Northumberland and Jane Guildford (that was how he got his unusual name). He was very handsome, but arrogant and selfish because his mother spoiled him ever since he was a child.

In 1553, Guildford was told by his father that he was to marry Lady Jane Grey. Like many other people in the sixteenth century, Guildford complied. However, Jane did not want to marry Guildford because she thought he was rude. Jane only agreed after her parents had beaten and whipped her. When Jane became queen, in July 1553, they got into an argument about Guildford becoming king. Guildford claimed than he should be king, but Jane did not believe that Guildford had the qualities to become king. She said she would make him duke, but Guildford was unhappy. Guildford and his mother attempted to leave the Tower of London, but Jane had him brought back. Jane lost the throne on July 19 1553.

At first, Guildford and Jane were allowed to visit each other, but only in the garden. However, for the last few months of their lives, they were not allowed to visit each other anymore. A few days before their execution, Guildford asked Jane if they could visit one last time, but Jane refused. On February 12 1553, Guildford was executed and, unlike his wife, he was not very calm when he went to his death. Days before his death, he cried endlessly. However, on the day he was executed, he was calm. At the sight of the block, however, he lost his courage and cried again. He is said to have cried "Pray for me!" many times.

All content from Kiddle encyclopedia articles (including the article images and facts) can be freely used under Attribution-ShareAlike license, unless stated otherwise. Cite this article:
Guildford Dudley Facts for Kids. Kiddle Encyclopedia.