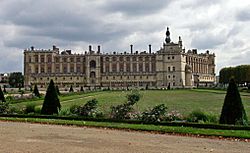 Louisa's birthplace, the Château of Saint-Germain-en-Laye.

Louisa Maria was born in 1692, at Saint-Germain-en-Laye in France, four years after her father had fled England for good.

The new-born princess was given the name Louisa Maria in baptism, while Teresa (sometimes spelt Theresa) was added later, at the time of her confirmation. Her godparents were King Louis XIV of France (in whose honour she was named), and King Louis's sister-in-law, Elizabeth Charlotte, Princess Palatine, Duchess of Orléans.

James II had fathered numerous children by his two wives, but only four of them would survive infancy, and among them, the two older children, Queen Mary II and the future Queen Anne, lived in England. Only her brother James Francis Edward was close to Louisa, but she did have contact with her other sisters also. Mary died while Louisa Maria was still a small child, but she was on friendly terms with her other half-sister Anne. 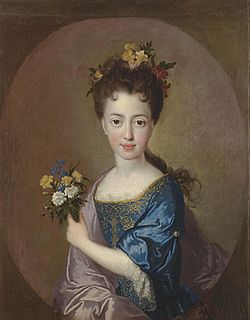 Portrait of Louisa Maria by François de Troy, about 1705

Louisa was the only full sibling of Prince James Francis Edward, the 'Old Pretender', to survive infancy, and was four years younger than her brother. The two were brought up together in France.

Louisa's tutor was an English Roman Catholic priest, Father Constable, who taught her Latin, history, and religion. She also had a governess, the Countess of Middleton, wife of the Jacobite peer Charles, 2nd Earl of Middleton. James Drummond, 4th Earl of Perth, another Jacobite peer living in France, praised the child's natural affability. 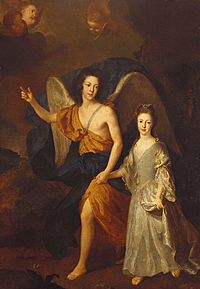 Portrait of Louisa Maria and her brother James Francis Edward by Alexis Simon Belle, about 1699

An allegorical portrait by Alexis Simon Belle of James Francis Edward and his sister Louisa Maria, showing the prince as a guardian angel leading his sister under the gaze of cherubim, was painted in 1699 and is now in the Royal Collection.

By the summer of 1701, King James was seriously ill, and had been away from Saint Germain seeking medical treatment, accompanied by his wife. However, in June the two returned home for the birthdays of their two children, and two months later James suffered a stroke, dying just two weeks later on 16 September. He was still able to talk when his children visited him for the last time. 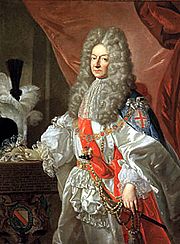 Soon after James's death, Louis XIV proclaimed James Francis Edward as king of England, Scotland and Ireland, and he was also formally recognised as king by Spain, the Papal States and Modena. He and his sister Louisa Maria were transferred to Passy, into the care of Antoine Nompar de Caumont and his wife, with Lady Middleton continuing as Louisa Maria's governess there.

In 1705, at the age of thirteen, Louisa Maria was a guest of honour at a ball at the Château de Marly, ranking only after Louis XIV himself, her own mother Queen Mary, and her brother James Francis Edward, considered by Louis to be another King.

Louisa Maria enjoyed dancing and the opera, and became popular at the French court.

Louisa felt that Jacobites in exile had made huge sacrifices for her family, and she herself paid for the daughters of many of them to be educated. In this, she made no distinction between Roman Catholics and Protestants, supporting the daughters of both. 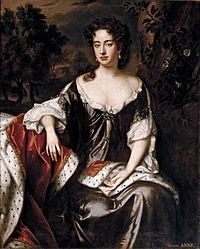 In April 1712, both James Francis Edward and his sister fell sick with smallpox. While James recovered, Louisa Maria died on 28 April (18 April, Old Style) and was buried with her father at the Church of the English Benedictines in Paris.

All content from Kiddle encyclopedia articles (including the article images and facts) can be freely used under Attribution-ShareAlike license, unless stated otherwise. Cite this article:
Louisa Maria Stuart Facts for Kids. Kiddle Encyclopedia.