Louisville is a city in Pottawatomie County, Kansas, United States. As of the 2010 census, the city population was 188.

Founded in 1857 by Robert Wilson, Louisville was originally known as Rock Post. The area was once part of the Potawatomi Hunting grounds and a large majority of the settlers were either associated with the Pottawatomie Indian Reservation or commerce on the Oregon Trail. Louisville was named for Robert Wilson's son, Louis, and for Louis Vieux, a successful businessman in the area. The town was a contender for county seat of Pottawatomie County but lost to St. George in 1861 and Westmoreland in 1882.

On November 8, 1875, Louisville was struck by an earthquake. In 1882, with the county seat in Westmoreland and the Union Pacific Railroad built through Wamego, the town's population swiftly declined.

Louis Vieux was a prominent citizen of Louisville who operated a trail crossing across the Vermillion River. He was born in 1809 in Wisconsin and was of Pottawatomie and French descent. Vieux and his wife, Sha-Note, moved first to Cedar Bluffs, Iowa in 1832 until moving to Indianola, Kansas (northwest of Topeka along Soldier Creek) in 1846. Sha-Note died in 1857 and Vieux moved to the Vermillion River near present-day Louisville. Vieux began his trail crossing business and worked as a caller for the U.S. Government working the pay station in St. Mary's and he also served on the tribal council and made trips to Washington, D.C. on behalf of the Pottawatomies. Vieux also signed the treaty that split the Pottawatomies into two separate tribes-the Prairie Band and Citizen Potawatomi Nation. Vieux died in 1872 and left behind a 200-page will leaving half the town of Louisville, all of Belvue and other personal property to his wife and children. 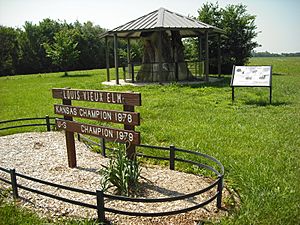 About three miles east of Louisville was the Vermillion Crossing of the Oregon Trail operated by Louis Vieux. Vieux is buried in the Vieux Family Cemetery on top of a hill. Nearby, on the banks of the river, is a cholera cemetery from 1849, which is estimated to contain at least fifty graves, although only two stones — both native sandstones — remain. The Louis Vieux Elm Tree is across the river and is estimated to be over 300 years old. The tree had been afflicted with Dutch Elm disease, a lightning strike and vandalism and efforts were taken to protect and shelter the tree's stump. In August 2011, the stump was destroyed by fire. Near the tree are the graves of seven unknown soldiers.

Louisville is part of the Manhattan, Kansas Metropolitan Statistical Area.

There were 78 households of which 29.5% had children under the age of 18 living with them, 38.5% were married couples living together, 10.3% had a female householder with no husband present, 1.3% had a male householder with no wife present, and 50.0% were non-families. 26.9% of all households were made up of individuals and 10.2% had someone living alone who was 65 years of age or older. The average household size was 2.41 and the average family size was 3.18.

There were 77 households out of which 37.7% had children under the age of 18 living with them, 54.5% were married couples living together, 18.2% had a female householder with no husband present, and 26.0% were non-families. 19.5% of all households were made up of individuals and 7.8% had someone living alone who was 65 years of age or older. The average household size was 2.71 and the average family size was 3.09.

All content from Kiddle encyclopedia articles (including the article images and facts) can be freely used under Attribution-ShareAlike license, unless stated otherwise. Cite this article:
Louisville, Kansas Facts for Kids. Kiddle Encyclopedia.