Ludshott Common is one of the largest remaining areas of heathland in East Hampshire. It lies parallel to and south of the B3002 road between Headley Down to the west and Grayshott to the east. It covers 285 hectares (700 acres) and is designated a Site of Special Scientific Interest (SSSI) and Special Protection Area (SPA) due to the number of endangered species, including woodlark, nightjar and Dartford warbler. There are also a great many spiders and butterflies, including silver-studded blue, grayling and green hairstreak.  Adders, grass snakes and sand lizards also inhabit the common. Rabbits are widespread and roe deer may occasionally be seen. The most common trees are Scots pine and silver birch, with some oak.

While much of the common is heather and gorse scrub on a fine sandy soil, there is an elevated stand of mature Scots pine trees with little or no undergrowth known locally as "the cathedral" or "cathedral pines".

In 2013 consultations were underway with a view to seeking permission to resume grazing on 550 acres of the common.

Ludshott Common constituted half of the ancient Manor of Ludshott, which dated back to Saxon times. It is described as being under the lordship of Hugh de Port in the Domesday Book of 1086; in 1066 the overlord had been King Edward the Confessor. Court baron rolls go back to about 1400.

Ludshott Common owes its present state to the traditional use made of common land by local people: to graze their cattle, pigs, sheep, and ponies and to collect gorse, heather, wood, and bracken for fuel, and for animal bedding and winter fodder. Such uses ceased around the beginning of the 20th century. The land was acquired by the National Trust in 1908 in response to the growing pressure from housing development in Headley Down.

During the Second World War in the 1940s, Ludshott Common was used as a tank manoeuvres training ground, and the heather was largely turned to mud. The heather recovered, and was managed from the 1970s onwards. A camp (named Superior Camp) for Canadian troops, one of several in the vicinity, was built at the eastern corner of the common. Evidence of the layout can be seen even though it was demolished in the 1950s/1960s.

On 12 May 1980, 600 of the 695 acres (2.81 km2) were burnt by a fire fanned by high winds. Residents of Seymour Road, Furze Hill and Pond Roads which bordered the common, to the west, in Headley Down were evacuated. Firefighters brought the fire under control in just over seven hours at 19:55. Relief crews remained on site overnight controlling small outbreaks of fire and damping down, with further relief crews taking over at 06:00 the following morning. 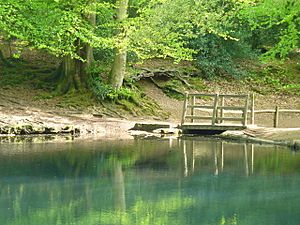 The original name of the series of ponds was Wakeners' Wells. They were created in the 17th century by the Hooke family of Bramshott.  They were possibly originally intended as hammer ponds, that is, to serve the local iron industry, but they appear never to have been so used. The woodland surrounding the ponds is notable for its mature beech trees.

Vehicular access is via Waggoners Wells Lane from Grayshott as far as the ford and a small car park beyond; the lane originally continued south-eastwards to Kingswood Lane, and thence to the London to Portsmouth road (A3), but today only a footpath through the woodland remains.

Catch and release fishing for carp, roach, tench, perch and other species is a popular pursuit, as is nature rambling and birdwatching. 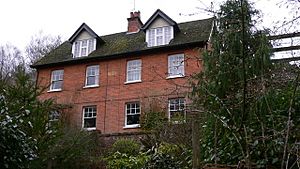 The stream that emerges from the pond furthest to the south-west is called Cooper's Stream. The house situated at the bottom of the ponds is Summerden and is a private residence of the National Trust warden of the area. Near it is a wishing well, mentioned by Flora Thompson in her writings of the locality. The stream flowing from Waggoners Wells runs west to Standford, around the west of Headley, and eventually into the River Wey. The stream powered many mills that worked ironworks, including Headley Mill. Paper mills were also run along the water that flowed from Waggoners Wells.

The gatefold photo of Fleetwood Mac's 1973 album Penguin was shot on location at Waggoners Wells.

All content from Kiddle encyclopedia articles (including the article images and facts) can be freely used under Attribution-ShareAlike license, unless stated otherwise. Cite this article:
Ludshott Common and Waggoners Wells Facts for Kids. Kiddle Encyclopedia.