Lyons is a town in Wayne County, New York, United States. The population was 5,682 at the 2010 census. It is named after Lyon, France.

The Town of Lyons is in the south-central part of the county and contains a hamlet also named Lyons, formerly a village. It is located on the Erie Canal, and is the county seat of Wayne County.

The area was part of the Pulteney Estate. Settlement began around 1789. The region was originally known as "The Forks." The Town of Lyons was formed from the Town of Sodus in 1811. The Erie Canal was completed as far as Lyons by 1821.

In 1825, the size of the town was reduced upon the formation of the Town of Arcadia.

The Dipper Dredge No. 3 and Towar-Ennis Farmhouse and Barn Complex are listed on the National Register of Historic Places.

Remnants of the former Enlarged Erie Canal Lock 56 (also called the Poorhouse Lock) are located along Dry Dock Road near the current Lock 28A and dry docks complex west of Lyons, just off N.Y. Route 31. It was a double-chamber lock built in 1842, and had a lift of 10.12 feet (3.08 m) to the west. The lock was abandoned around 1911.

Lyons is part of the Erie Canalway National Heritage Corridor. Erie Canal Lock 28A is located just west of the bridge on Dry Dock Road, off N.Y. Route 31. It was built around 1913, and has a lift of 19.5 feet (5.85 m) to the west. The dry docks complex is adjacent to the lock, operated by the New York State Canal Corporation.

Communities and locations in the Town of Lyons 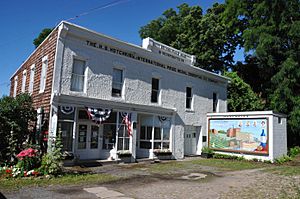 H.G. Hotchkiss moved his Hotchkiss Essential Oil Company to Lyons in 1841, where it became an important business in the local economy.

All content from Kiddle encyclopedia articles (including the article images and facts) can be freely used under Attribution-ShareAlike license, unless stated otherwise. Cite this article:
Lyons, New York Facts for Kids. Kiddle Encyclopedia.