Sodus is a town in Wayne County, New York, United States. The population was 8,384 at the 2010 census. The town takes its name from a native word for the bay in the eastern part of the town: "Assorodus," meaning "silvery water."

The Town of Sodus is on the north border of the county and is midway between Rochester and Syracuse. 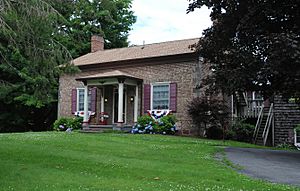 The Town of Sodus was formed in 1789 from the older "District of Sodus" while still part of Ontario County. The town's Adam territory was substantially reduced by the formation of newer towns in the county: Williamson (1802) and Lyons (1811).

The town contains a village named Sodus and another named Sodus Point. Sodus Point was settled around 1794 because of a road constructed from Palmyra, but the first settlers did not arrive at the Village of Sodus until about 1809.

In 1813, the British attacked and burned the village of Sodus Point.

A lighthouse was erected in 1825 to mark the shoreline.

Members of the Shakers settled in the early town, but moved away, when they believed Sodus was becoming too worldly. Sodus claims to be the birthplace of Arbor Day, a holiday established by the efforts of Sodus Center native Edward C. Delano.

The Preston-Gaylord Cobblestone Farmhouse was listed on the National Register of Historic Places in 2009.

The north border is Lake Ontario. Sodus Bay, a bay of Lake Ontario is partly in the town.

Sodus is a town on the northern boundary of the United States, and Canada is on the opposite shore of Lake Ontario.

Sodus is also known for its rural landscape and abundance of apples.

Communities and locations in the Town of Sodus

All content from Kiddle encyclopedia articles (including the article images and facts) can be freely used under Attribution-ShareAlike license, unless stated otherwise. Cite this article:
Sodus, New York Facts for Kids. Kiddle Encyclopedia.