Lysichiton americanus, also called western skunk cabbage (US), yellow skunk cabbage (UK), American skunk-cabbage (Britain and Ireland) or swamp lantern, is a plant found in swamps and wet woods, along streams and in other wet areas of the Pacific Northwest, where it is one of the few native species in the arum family. The plant is called skunk cabbage because of the distinctive "skunky" odor that it emits when it blooms. This odor will permeate the area where the plant grows, and can be detected even in old, dried specimens. The distinctive odor attracts its pollinators, scavenging flies and beetles. Although similarly named and with a similar smell, the plant is easy to distinguish from the eastern skunk cabbage (Symplocarpus foetidus), another species in the arum family found in eastern North America. 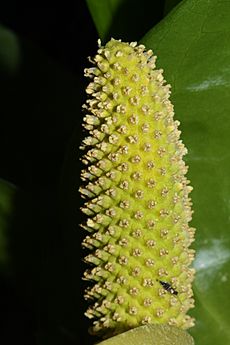 The plant grows from rhizomes that measure 30 cm or longer, and 2.5 to 5 cm in diameter. The short-stalked leaves are the largest of any native plant in the region, 30–150 cm long and 10–70 cm wide when mature. Its flowers are produced in a spadix contained within a 7–12 cm, large, bright yellow or yellowish green spathe atop a 30–50 cm stalk. The flowers are numerous and densely packed. It is among the first flowers to bloom in late winter or early spring. Unlike the genus Symplocarpus (which includes S. foetidus, the eastern skunk cabbage), the flowers of Lysichiton species do not produce heat, although this is widely and incorrectly said to be the case.

The plant was introduced into cultivation in the United Kingdom in 1901 and has escaped to become naturalized in marshy areas in Britain and Ireland, for example in Hampshire and Surrey, including Wisley Gardens, and in the north and west of the UK. In 2016, it was classified by the European Union as an invasive non-native plant species.

It was used as an ornamental garden plant in Britain and Ireland, where it grows well in marshy conditions. As of 2018, the Royal Horticultural Society recommends that it should not be cultivated.

Hybrids with Lysichiton camtschatcense, called Lysichiton × hortensis, are also cultivated. These have larger spathes than either of the parents.

While some consider the plant to be a weed, its roots are food for bears, who eat it after hibernating as a laxative or cathartic. Deer may browse the leaves.

The plant was used by indigenous people as medicine for burns and injuries, and for food in times of famine, when the leaves were heated and eaten. The leaves have a somewhat spicy or peppery taste. The plant contains calcium oxalate crystals, which result in a prickling sensation on the tongue and throat and can result in intestinal irritation and even death if consumed in large quantities. Although the plant was not typically part of the diet under normal conditions, its large, waxy leaves were important to food preparation and storage. They were commonly used to line berry baskets and to wrap around whole salmon and other foods when baked under a fire. It is also used to cure sores and swelling. 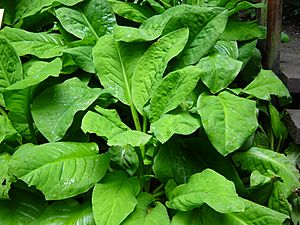 All content from Kiddle encyclopedia articles (including the article images and facts) can be freely used under Attribution-ShareAlike license, unless stated otherwise. Cite this article:
Lysichiton americanus Facts for Kids. Kiddle Encyclopedia.