Magherafelt (from Irish: Machaire Fíolta, meaning "plain of Fíolta", [ˈmˠaxəɾʲəˈfʲiːlt̪ˠə]) is a small town and civil parish in County Londonderry, Northern Ireland. It had a population of 8,805 at the 2011 Census. It is the biggest town in the south of the county and is the social, economic and political hub of the area. It is part of Mid-Ulster District.

Magherafelt has been documented as a town since 1425. Following the Plantation of Ulster, a central diamond has formed the heart of the town. During The Troubles in the late 20th century, 11 people were killed in or near Magherafelt in connection with the troubles.

See also: The Troubles in Magherafelt

Magherafelt lies on the A31 route which connects the south west of the province (Tyrone, Fermanagh) to the north east (Coleraine, Ballymena etc.). Traffic from north and south used to pass through the town centre frequently leading to considerable congestion. In the 1970s a bypass was proposed route which was eventually funded in 2013 and completed in 2016. The road is a single-carriageway around the eastern edge of the town connecting Moneymore Road and Castledawson Road. The old road through the town became the B40 when the road opened.

Magherafelt is classified as a small town by the Northern Ireland Statistics and Research Agency (NISRA) (i.e. with population between 4,500 and 10,000 people). On Census day (29 April 2001) there were 8,372 people living in Magherafelt. Of these: 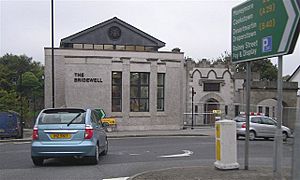 At the foot of Broad Street is located The Bridewell. This building previously housed the town's court-house and gaol (jail). The name Bridewell is a common name in Britain and Ireland for a prison (see Bridewell Palace). It has since been refurbished and now houses the town's library and tourist centre.

All content from Kiddle encyclopedia articles (including the article images and facts) can be freely used under Attribution-ShareAlike license, unless stated otherwise. Cite this article:
Magherafelt Facts for Kids. Kiddle Encyclopedia.