Mantis Peak is the unofficial name of a 7,614-foot (2,321-metre) double-summit mountain located in North Cascades National Park in Skagit County of Washington state. Its nearest higher peak is Snowfield Peak, 1.23 mi (1.98 km) to the west, and Styloid Peak rises 0.48 mi (0.77 km) to the east. Precipitation runoff from Mantis Peak drains into Neve Creek and McAllister Creek, both tributaries of Thunder Creek. With a steep north face sculpted by the Neve Glacier, relief is significant as the summit rises 4,000 feet above the head of Neve Creek valley in less than one mile, and the south side rises 5,400 feet above McAllister Creek valley in 1.5 mi (2.4 km). The first ascent of Mantis Peak was made August 16, 1973 by Marilyn and Stan Jensen. "Distal Phalanx", the slightly higher twin summit, was first climbed on May 31, 1981, by John Roper and party, on the same day that he climbed Styloid Peak. Roper, being a doctor, named some of his many first ascents for anatomical parts of the body.

Mantis Peak is located in the marine west coast climate zone of western North America. Most weather fronts originate in the Pacific Ocean, and travel northeast toward the Cascade Mountains. As fronts approach the North Cascades, they are forced upward by the peaks of the Cascade Range, causing them to drop their moisture in the form of rain or snowfall onto the Cascades (Orographic lift). As a result, the west side of the North Cascades experiences high precipitation, especially during the winter months in the form of snowfall. Because of maritime influence, snow tends to be wet and heavy, resulting in high avalanche danger. During winter months, weather is usually cloudy, but, due to high pressure systems over the Pacific Ocean that intensify during summer months, there is often little or no cloud cover during the summer. The months July through September offer the most favorable weather for viewing or climbing this peak. 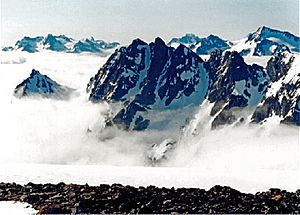 All content from Kiddle encyclopedia articles (including the article images and facts) can be freely used under Attribution-ShareAlike license, unless stated otherwise. Cite this article:
Mantis Peak Facts for Kids. Kiddle Encyclopedia.