Born in San José, Costa Rica, Ureña started his career at Primera División side Alajuelense and in March 2011, he joined Russian Premier League side Kuban Krasnodar.

In August 2014, Ureña moved to Danish Superliga side FC Midtjylland on a four-month loan deal. The contract was made permanent on 10 December 2014.

On 21 July 2016, Midtjylland and Brøndby IF agreed to swap Ureña with Jonas Borring in a three-year deal.

It was announced on 27 January 2017 that Ureña had been signed by Major League Soccer side San Jose Earthquakes. He scored his first MLS goal in a 2–1 road loss to New York City FC at Yankee Stadium on 1 April 2017. Ureña recorded his first MLS assist at home to achieve a 1–1 draw against Seattle Sounders FC on 8 April 2017. His game-winning goal over Minnesota United FC on 22 October secured San Jose's sixth-place spot in the 2017 MLS Cup Playoffs, the team's first playoff appearance since 2012.

On 12 December 2017, MLS expansion side Los Angeles FC selected Ureña as its third pick in the 2017 MLS Expansion Draft.

Following his release by Los Angeles, Ureña was selected by Chicago Fire in the MLS Waiver Draft on 12 December 2018. However, he opted to join Alajuelense on 21 January 2019.

Ureña participated in the 2009 FIFA U-20 World Cup for Costa Rica where Costa Rica U-20 national football team, placed 4th after losing to Hungary in the match for the 3rd place. He scored three goals on that competition.

In 2009, Ureña made his debut for the Costa Rica national football team in a match against Venezuela.

In June 2014, Ureña was named in Costa Rica's squad for the 2014 FIFA World Cup. In the team's opening match, he scored the third goal for Los Ticos in a 3–1 defeat of Uruguay.

At the 2017 CONCACAF Gold Cup, he scored the winner in Costa Rica's opening match and 0–1 victory against Honduras off of an assist from New York City FC man and fellow MLS player Rodney Wallace on 7 July 2017, at Red Bull Arena. This performance earned him CONCACAF Man of the Match honors. 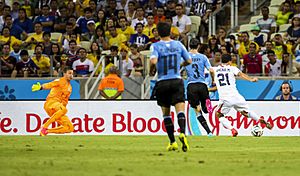 All content from Kiddle encyclopedia articles (including the article images and facts) can be freely used under Attribution-ShareAlike license, unless stated otherwise. Cite this article:
Marco Ureña Facts for Kids. Kiddle Encyclopedia.