Margaret is the only prograde non-spherical moon of Uranus. It was found by Scott S. Sheppard, et al. in 2003 and given the designation S/2003 U 3.

Confirmed as Uranus XXIII, it was named after the servant of Hero in William Shakespeare's play Much Ado About Nothing 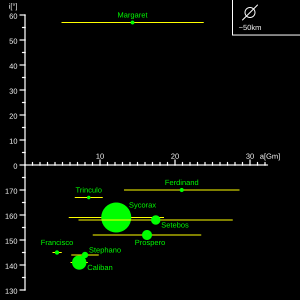 Margaret stands out as the only prograde non-spherical moon of Uranus. The diagram illustrates the orbital parameters of Margaret, unique among the non-spherical moons of Uranus, with inclination on the vertical axis and the eccentricity of the orbits represented by the segments extending from the pericentre to the apocentre.

All content from Kiddle encyclopedia articles (including the article images and facts) can be freely used under Attribution-ShareAlike license, unless stated otherwise. Cite this article:
Margaret (moon) Facts for Kids. Kiddle Encyclopedia.