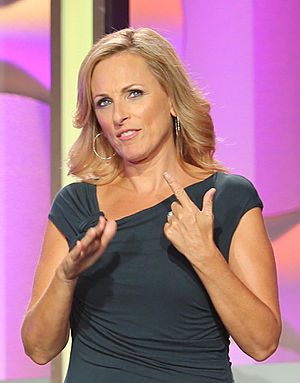 Marlee Bethany Matlin (born August 24 1965) is an American television and movie actress. She is also deaf. Deaf means she cannot hear. She is the only deaf person to win an Academy Award for Best Actress. At the age of 21, she was also the youngest woman in history to win. She won for her part in Children of a Lesser God. In addition to her acting work, she also works with the National Association of the Deaf. She is known for her work on television shows such as Reasonable Doubts, Desperate Housewives, The West Wing, and Switched at Birth.

Matlin was born in Morton Grove, Illinois to Libby and Donald Matlin. Her father sold cars for a living. She has two older brothers. They are Eric and Marc. At 18 months of age, she lost all hearing in her right ear and 80% of her hearing in her left ear. She thinks she lost her hearing because of a genetic problem in her cochlea. She is the only person in her family who is deaf.

Her family is Jewish. Matlin had a Bat Mitzvah. A Bat Mitzvah is a coming of age party for girls in the Jewish tradition. She had to read the Torah. The Torah is an important book for Jewish people, and it is in Hebrew. Because she was deaf, she learned to read it by memorizing the sounds of the Hebrew letters. She went to John Hersey High School in Arlington Heights and Harper College.

Matlin first acted when she was seven years old as Dorothy in the Wizard of Oz for a children's theater. As a child, she acted many times with the children's theater. Henry Winkler saw her at one of these shows and asked her to act in Children of a Lesser God (1986). Children of a Lesser God is about a deaf woman who works cleaning a deaf school. A new teacher comes to the school, and he tries to get her to speak out loud. They fall in love, but because she is deaf and he is hearing, there are some problems. For this movie, Matlin won an Academy Award for Best Actress and Golden Globe Award for Best Actress in a Drama.

In 1988, Matlin was a guest on Sesame Street. She sang Just the Way You Are with Billy Joel. She used sign language during the song and hugged Oscar the Grouch at the end.

Next, from 1993-1996 Matlin worked on "Picket Fences." This television show was about strange things in the town of Rome, Wisconsin. At first, Matlin was a guest on this show. In the third year of the show, her character became the leader of the town. During the last year of the show, Matlin was a regular actress on the show. She was nominated for an Emmy Award for her work on "Picket Fences.""

In 1994, Matlin acted as Carrie Buck in Against Her Will: The Carrie Buck Story (1994). This television movie is about the United States Supreme Court case Buck v. Bell 274 U.S. 200 (1927). Matlin played a hearing woman for the first time, and she was nominated for a CableACE award for Best Actress.

From 2000-2006, Matlin worked on The West Wing. This television show is about the American White House. Matlin's character helped the President.

From 2007-2009, Matlin worked on The L Word. Matlin started working on this television show in its fourth year. She was Jodi Lerner. Jodi is a gay artist who works with stone. Jodi is the girlfriend of the show's main character, Bette Porter. Bette Porter is played by Jennifer Beals.

In 2008, Matlin appeared on Dancing with the Stars. Matlin danced with Fabian Sanchez. They were the sixth group to leave the competition.

Matlin did another reality television show called The Celebrity Apprentice. The Celebrity Apprentice is hosted by Donald Trump and is on NBC. Matlin finished in second place. She won some money, and she gave the money to the Starkey Hearing Foundation. In the fifth show called "The Art of the Deal" on April 3, 2011, Matlin made $986,000 for her group. This was the most money ever given at one time on a television show before. Trump added $14,000 to make one million dollars to give to the Starkey Hearing Foundation.

In addition to acting, Matlin has done other public work. On October 15-18, 2004, Matlin was the host of the 3rd Annual Festival for Cinema of the Deaf in Chicago. Annual means people do it every year. On February 4, 2007, Matlin sang the "Star Spangled Banner" in American Sign Language at the 41st Super Bowl in Miami, Florida.

In 2002, Matlin wrote her first book. It is called Deaf Child Crossing, and it is based on her childhood. She also wrote a second book called Nobody's Perfect. The second book was turned into a stage show at the John F. Kennedy Center for Performing Arts in October 2007.

In 2009, Matlin wrote a book about herself. The name is I'll Scream Later. She tells about her drug problem and about the time when she was dating William Hurt. William Hurt is also an actor.

Matlin married Kevin Grandalski on August 29, 1993. Grandalski is a police officer. They met when she was working on Reasonable Doubts. Grandalski was working security and helping with traffic that day. They have four children: Sarah, Brandon, Tyler, and Isabelle.

Matlin works with many groups to help people. She works with Easter Seals, the Children Affected by AIDS Foundation, and the Red Cross. She also supports Jewish groups.

In 1987, Matlin got an honorary degree from Gallaudet University.

All content from Kiddle encyclopedia articles (including the article images and facts) can be freely used under Attribution-ShareAlike license, unless stated otherwise. Cite this article:
Marlee Matlin Facts for Kids. Kiddle Encyclopedia.