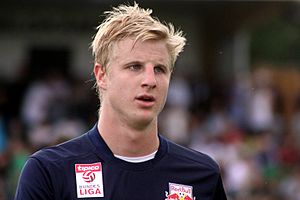 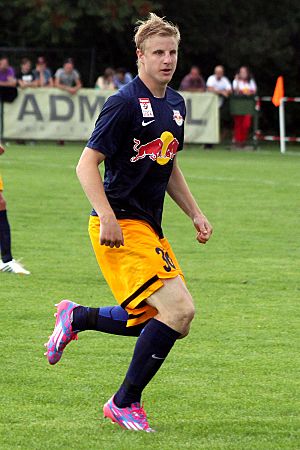 Martin Hinteregger ( born September 7 th, 1992 in Feldkirchen, Carinthia) is an Austrian footballplayer and plays for FC Red Bull Salzburg in the Austrian Football Bundesliga as defender.

He started playing in the local soccer club SGA Sirnitz and played in different youth teams. 2006 he came to Red Bull Salzburg. His first match in professional football was on April, 23rd 2006 in the second squad of Red Bull Salzburg in the Austrian Football First League, which is the second highest league in Austria. Due to the injury of Andreas Ulmer he was transferred to the first squad. His first match in the Bundesliga was versus SV Kapfenberg on October 16, 2010. Five days later he debuted in an international match versus Juventus Turin. In the season 2010/11 he plaed 17 times for the first squad of FC Salzburg. This was honoured through the title "Rookie of the Year 2010" in the Leonidas-election where the best athlets in Salzburg are elected. In the 2013/14 season he became a regular member of the starting team. 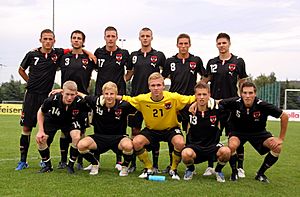 Martin Hinteregger played in different Austrian youth teams so U17 (two times), U18 and U19(4 times). U stands for "under". On November 19th, 2013 he played his first match in the national team against the USA.

His grandfather was in the first team of the new founded SGA Sirnitz and his sister is playing in the womansquad of the club.

All content from Kiddle encyclopedia articles (including the article images and facts) can be freely used under Attribution-ShareAlike license, unless stated otherwise. Cite this article:
Martin Hinteregger Facts for Kids. Kiddle Encyclopedia.