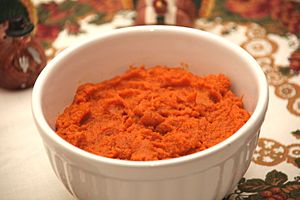 A bowl of mashed pumpkin.

Mashed pumpkin is a vegetable dish made by cooking or macerating the skinless flesh (pulp) of pumpkins and then mashing, straining, grinding, or puréeing until the desired consistency is achieved. It is traditionally served as a side dish, although it has many uses in cooking and baking.

Chefs generally recommend steaming when cooking pumpkin to make mashed pumpkin, as boiling in liquid tends to significantly dilute the flavor. Some chefs recommend fried or roasted pumpkin for its flavor value over mashed pumpkin. But well-seasoned mashed pumpkin goes well with cooked game birds such as quail, and mashed pumpkin sweetened with dark maple syrup is a common New England side dish served alongside roast chicken or baked ham. Mashed pumpkin may also be used as a substitute for fat in many bread and cake recipes.

All content from Kiddle encyclopedia articles (including the article images and facts) can be freely used under Attribution-ShareAlike license, unless stated otherwise. Cite this article:
Mashed pumpkin Facts for Kids. Kiddle Encyclopedia.