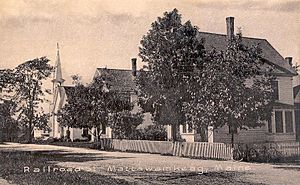 Mattawamkeag's history is inextricably linked to the railroad.

The European & North American Railway built a track up the Penobscot River valley from Bangor and reached Mattawamkeag in 1869. By October 1871 the line was completed from Mattawamkeag to Vanceboro, where it connected through to Saint John, New Brunswick, Canada. The Maine Central Railroad leased the Bangor-Vanceboro E&NA in 1882 and purchased it in 1955.

In 1889 the International Railway of Maine was completed between Megantic, Quebec, and Mattawamkeag, where it interchanged with the Maine Central. The parent company of the International Railway, Canadian Pacific, obtained running rights from Maine Central for Mattawamkeag to Vanceboro where it regained CPR trackage in New Brunswick. This placed Mattawamkeag on the transcontinental mainline of the Canadian Pacific, running from Saint John to Vancouver, British Columbia. In 1974, CPR purchased the Mattawamkeag-Vanceboro railway tracks from Maine Central. In 1988, CPR transferred trackage east of Megantic to its subsidiary Canadian Atlantic Railway. In 1994, Canadian Atlantic was sold, with the line running through Mattawamkeag being purchased by J. D. Irving and is now operated as the Eastern Maine Railway.

Maine Central was purchased by Guilford Transportation Industries in 1981 and became part of Guilford Rail System, which is now named Pan Am Railways. Mattawamkeag is the eastern terminus of PAR, running west to upstate New York through the states of Maine, New Hampshire and Massachusetts.

The George W. Smith Homestead (1874) in Mattawamkeag is listed on the National Register of Historic Places.

There were 317 households, of which 20.2% had children under the age of 18 living with them, 47.6% were married couples living together, 8.8% had a female householder with no husband present, 5.7% had a male householder with no wife present, and 37.9% were non-families. 31.5% of all households were made up of individuals, and 12.9% had someone living alone who was 65 years of age or older. The average household size was 2.17 and the average family size was 2.66.

All content from Kiddle encyclopedia articles (including the article images and facts) can be freely used under Attribution-ShareAlike license, unless stated otherwise. Cite this article:
Mattawamkeag, Maine Facts for Kids. Kiddle Encyclopedia.