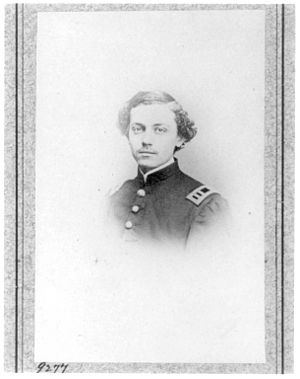 Woodhull was born in Washington, D.C. on September 17, 1843. He was the son of United States Navy officer Maxwell Woodhull who commanded the USS Cimarron and died from an accidental gun discharge during the Civil War. He was a graduate of Miami University (Ohio) and Columbian Law School. He was a lawyer before and after the Civil War.

On February 22, 1866, President Andrew Johnson nominated Woodhull for appointment to the grade of brevet brigadier general of volunteers, to rank from March 13, 1865, and the United States Senate confirmed the appointment on April 10, 1866. Woodhulll was mustered out of the volunteers on May 31, 1866.

Woodhull wrote West Point in Our Next War: The Only Way to Create and Maintain an Army (1915). Woodull was largely responsible for bringing George Washington University to its present location.

All content from Kiddle encyclopedia articles (including the article images and facts) can be freely used under Attribution-ShareAlike license, unless stated otherwise. Cite this article:
Maxwell Van Zandt Woodhull Facts for Kids. Kiddle Encyclopedia.