McArthur Lake is a lake in Saskatchewan, Canada. It lies in low-relief terrain of the Canadian Shield. The climate is sub-arctic. The land is mostly covered by conifer forests, with some areas of muskeg and rocky outcrops. 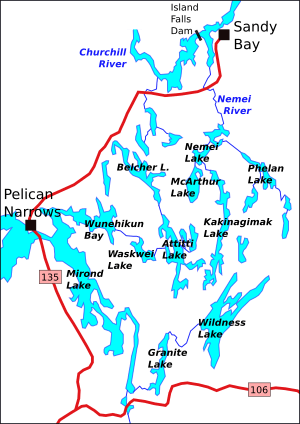 The Attitti Lake region, which includes McArthur Lake, is typical of the flat-surfaced part of the Canadian Shield, with low hills that rarely rise as much as 100 to 150 feet (30 to 46 m) above the lakes. The terrain consists of roughly parallel sinuous ridges of outcrop separated by muskeg, drift and lakes. Geologically the area is in the Precambrian Kisseynew complex, underlain by an assemblage of metamorphosed sedimentary rocks that has been intricately folded, with intrusions of sill-like granitic bodies.

The lake is in the subarctic climate zone. The annual average temperature is −2 °C (28 °F). The warmest month is July, when the average temperature is 16 °C (61 °F) and the coldest is January, with −29 °C (−20 °F). The lake is surrounded by coniferous forest. The trees are mainly black spruce (Picea mariana), jack pine (Pinus banksiana), poplar (populus) and scattered balsam (populus balsamifera). Trees average more than 20 feet (6.1 m) in height. There are small patches of moss-covered muskeg that support laurel (kalmia microphylla), labrador tea, and scattered larch and black spruce.

Dark gray to black garnet-hornblende gneiss is exposed in an area from north of Bentz Bay to just south of McArthur Lake. Small areas of hornblende and/or biotite migmatite are found near the lake. The light to dark gray outcrops are usually rounded and weathered. Dykes, lenses, and veins of pegmatite are abundant in the meta-sedimentary rocks and granitic bodies between the north of Attitti Lake and McArthur Lake. The northeast shore of Charbonneau Island has chalcopyrite and pyrite associated with stringers of pink pegmatite in biotite-hornblende migmatite. In 1958 the Hudson Bay Exploration and Development Company staked claims to this area based on a aerial electromagnetic and magnetometer survey. The company undertook a geophysical survey and some diamond drilling, then allowed the claims to lapse.

All content from Kiddle encyclopedia articles (including the article images and facts) can be freely used under Attribution-ShareAlike license, unless stated otherwise. Cite this article:
McArthur Lake (Saskatchewan) Facts for Kids. Kiddle Encyclopedia.