Meadview is an unincorporated community in Mohave County, Arizona, United States, located near Lake Mead. Despite its name, the town-site does not overlook the lake; a ridge to the west of town separates it from the lake. It had 1224 residents as of 2010. It was founded in the 1960s as a retirement community.As of today, Meadview is still largely a retirement community, as well as a vacation spot for people coming to enjoy Lake Mead.

According to the Köppen Climate Classification system, Meadview has a cold desert climate, abbreviated "BWk" on climate maps. 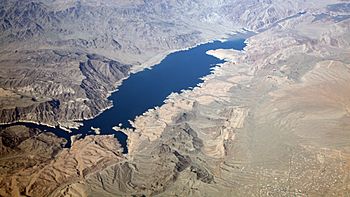 According to the 2010 Census, the racial composition of Meadview was as follows:

All content from Kiddle encyclopedia articles (including the article images and facts) can be freely used under Attribution-ShareAlike license, unless stated otherwise. Cite this article:
Meadview, Arizona Facts for Kids. Kiddle Encyclopedia.