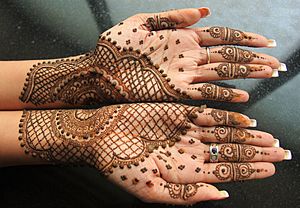 Mehndi (Henna) applied on both hands.

Henna, also known as mehandi or mendhi is a flowering plant. It has been used since ancient times to dye skin, hair, fingernails, leather, cotton, wool and other fabrics. The name is also used for the dye or color preparation derived from the plant, and for the art of making temporary tattoos or designs from these dyes. These henna tattoos are often used in wedding ceremonies.

In addition, the name is also sometimes used, wrongly, for other chemical preparations and dyes that are in fact not made from this plant.

The English name "henna" comes from the Arabic حِنَّاء (or colloquially حنا, loosely pronounced /ħinna/). The natural dye is still mostly used in Arabia, the Middle East, India, and Pakistan.

All content from Kiddle encyclopedia articles (including the article images and facts) can be freely used under Attribution-ShareAlike license, unless stated otherwise. Cite this article:
Henna Facts for Kids. Kiddle Encyclopedia.