Melrose (Scottish Gaelic: Maolros, "bald moor") is a small town and civil parish in the Scottish Borders, historically in Roxburghshire. It is in the Eildon committee area.

The town's name is recorded in its earliest form as Mailros, 'the bare peninsula' (Old Welsh or Brythonic), referring to the original site of the monastery, recorded by Bede, in a bend of the river Tweed. The original monastery at Melrose is referred to in the Anglo-Saxon Chronicle with the name Magilros.

In the late Middle Ages, when the monastery had been re-founded in its present position, its name was symbolically represented by the visual pun of a mell (mason's hammer) and a rose (symbolising the Virgin Mary, to whom all Cistercian abbeys were dedicated).

Melrose is the location of Melrose Abbey, re-founded for the Cistercian order by David I in the early 12th century, one of the most beautiful monastic ruins in Great Britain. It is the site of the burial of the heart of Scottish king Robert the Bruce. An excavation was led to find a sealed casket, but it was not opened, and it was actually discovered by high school students involved in the dig. The casket was placed in a sealed lead cylinder, and was then re-buried in the abbey back at its proper resting place. The remains of the Abbey are cared for by Historic Scotland (open all year; entrance charge).

Nearby is the Roman fort of Trimontium, and Dryburgh Abbey. Melrose is surrounded by the small villages of Darnick, Gattonside, Newstead, Lilliesleaf and Bowden.

Every year in June, the week-long Melrose Festival takes place. This involves appointing a Melrosian who has lived in the town for most of his life; and a queen and her court are appointed from the local primary school, Melrose Grammar School.

Melrose is now host to the annual Borders Book Festival which also takes place during June. The 2005 festival hosted guests including Michael Palin and Germaine Greer; Ian Rankin and Rory Bremner appeared in 2006. 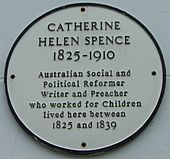 A wall plaque at the Townhouse Hotel in Melrose, Scotland. Spence lived the first 14 years of her life in a building which is now part of the hotel.

Melrose hosts the annual Eildon Two Hills Race, attracting many runners, and the Melrose Pipe Band Championships, attracting pipers from all over the world.

All content from Kiddle encyclopedia articles (including the article images and facts) can be freely used under Attribution-ShareAlike license, unless stated otherwise. Cite this article:
Melrose, Scottish Borders Facts for Kids. Kiddle Encyclopedia.