The Columbus and Franklin County Metro Parks are a group of 19 metropolitan parks in and around Columbus, Ohio. They are officially organized into the Columbus and Franklin County Metropolitan Park District. The Metro Parks system was organized in 1945 under Ohio Revised Code Section 1545 as a separate political division of the state of Ohio. The Metro Parks are overseen by a Board of Park Commissioners consisting of three citizens appointed to three-year terms without compensation by the Judge of the Probate Court of Franklin County, Ohio. The Board in turn appoints an Executive Director responsible for operations and management of the parks.

Located along the southwest boundary of Franklin County Battelle Darby Creek is the largest Metro Park at over 7,103 acres. The park encompasses lands and creek beds north & south of the confluance of the Big & Little Darby Creeks. Unique features include restored prairie areas that house a group of 10 American bison, a large nature center with exhibits about the exceptional biodiversity of Big Darby Creek, and a Fort Ancient mound. Thirteen miles of the Big Darby Creek and Little Darby Creek flow through the park. Much of the land for the park was donated by the Battelle Memorial Institute. The northern parcel lies just outside the town of West Jefferson (In Madison County). The park follows the Darby Creeks south past the village of Georgesville and continues towards the crosroads of Darbydale. Detached parcels of the park extend along Darby Creek to the village of Harrisburg (into Pickaway County). Location:39°53′17″N 83°12′57″W﻿ / ﻿39.8880556°N 83.2158333°W﻿ / 39.8880556; -83.2158333﻿ (Battelle Darby Creek Park)

Opened in 1948, and located in Reynoldsburg, this 643 acre park is the oldest park in the system. Within the forested area of the park is the Walter A. Tucker State Nature Preserve preserving one of the oldest Beech-maple forest in central Ohio. In the southern area of the preserve you can find an assortment of white and pin oak, white ash with specimens of red maple, red elm, shagbark and bitternut hickory, hophornbeam, American hornbeam and dogwood. There are also wetlands and seasonable ponds in the southern area of the nature preserve where salamanders, chorus frogs, and wood ducks among other aquatic life and amphibians can be found. Fox, Rabbits, and White-Tailed Deer can also be seen throughout the park. It is also well known as a good spot for bird watching. The Golf Course has been certified by Audubon International as a Cooperative Sanctuary. The Blacklick Woods Nature Center with Naturalists and volunteers is also available to answer questions. Blacklick Creek flows south along the eastern boundary of the park and is accessible by several trails that travel through a variety of fields, meadows, and forests. Location: 39°56′14″N 82°48′28″W﻿ / ﻿39.9372222°N 82.8077778°W﻿ / 39.9372222; -82.8077778﻿ (Blacklick Woods Park)

In 1974, Blacklick Woods was designated as a National Natural Landmark by the National Park Service. 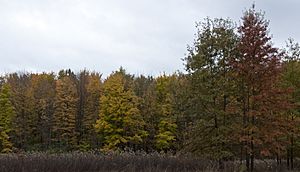 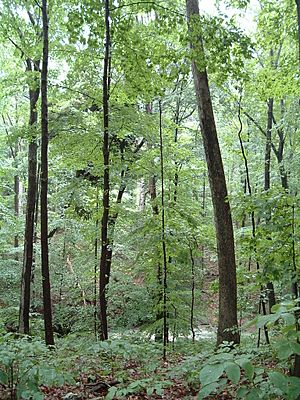 The most visited in the park system, Highbanks contains exceptional natural features and was designated as a National Natural Landmark. Located near Lewis Center, the park was named for large shale bluffs that overlook the Olentangy River. Within the park is a large nature center, a sledding hill, a Natural Play Area where off trail activity is permitted, Adena culture mounds, and the Edward F. Hutchins State Nature Preserve. Location: 40°08′38″N 83°01′42″W﻿ / ﻿40.143889°N 83.028333°W﻿ / 40.143889; -83.028333﻿ (Highbanks Park) 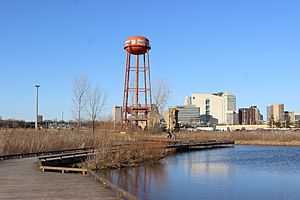 The most urban of the Metro Parks, Scioto Audubon is located in the Brewery District near Downtown Columbus. The park is a major bird migration stopover, and as such hosts the Grange Insurance Audubon Center. Opened in 2008, the park is situated on a peninsula stretching into the Scioto River and contains numerous wetland areas. Other features include multi-use trail connection to the north and south, a climbing wall, and an old water tower with an overlook deck. Location: 39°56′58″N 83°00′35″W﻿ / ﻿39.949444°N 83.009722°W﻿ / 39.949444; -83.009722﻿ (Scioto Audubon Park)

Named for Sharon Township where it is located, this park is among the most frequently visited. The park also includes the 320 acre Edward S. Thomas Nature Preserve containing eight different species of old growth oak trees, some more than 250 years old. The northern part of the nature preserve contains the Spring Hollow Outdoor Education Center lands. The ravine bottom around Spring Creek has a multitude of different trees including various sycamore, butternut, black walnut, Ohio buckeye, pawpaw and red elm. The southern part of the nature preserve which contains several trails and an observation deck contains fields, and meadows accompanying forests such as oak-hickory association with scattered beech with a recovering elm-ash swamp forest including red elm, with white, green and blue ash trees.

Columbus Metro Parks is continuing to expand with more acquisitions of land. One such expansion is in Blendon Township and is planned to remain rustic and primitive. The land currently under the management team from Blendon Woods Metro Park.

Metro Parks has also been working to restore a privately owned stone quarry and old landfill no longer in use transforming the property. Quarry Trails Metro Park will be located within Columbus on the west side of the Scioto River, between Griggs Dam and Downtown Columbus. Metro Parks notice about this park's build out and development listed the following "Planning and design are underway at Quarry Trails, the 20th Metro Park. Hiking, biking, picnicking, fishing and other traditional activities associated with the park system will be offered along with other more adventurous challenges such as climbing and paddle boarding." An official opening date has yet to be announced.

All content from Kiddle encyclopedia articles (including the article images and facts) can be freely used under Attribution-ShareAlike license, unless stated otherwise. Cite this article:
Columbus and Franklin County Metro Parks Facts for Kids. Kiddle Encyclopedia.