Milan Hodža (1 February 1878 – 27 June 1944) was a Slovak politician and journalist, serving from 1935 to 1938 as the Prime Minister of Czechoslovakia. As a proponent of regional integration, he was known for his attempts to establish a democratic federation of Central European states. 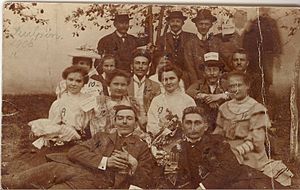 Supporters of Milan Hodža in 1906 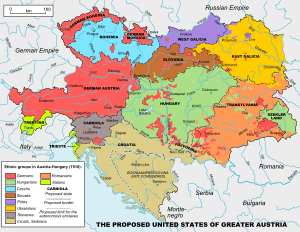 Milan Hodža was born in the Lutheran parish of Sučany, in the Turóc County of the Kingdom of Hungary (present-day Slovakia). His surname (meaning master or teacher in Turkish) was given to his ancestors at the times of the Ottomans conquest and rule.

He was a deputy to the parliament of the Kingdom of Hungary from 1905–1910. As a member of the Slovak National Party, the only Slovak party in Austria-Hungary, he became the ideological leader and founder of Slovak agrarianism. He was vice-chairman of the Slovak National Party from 1906-1914. Since the party did not endorse his agrarian program, he planned to create his own political party, but was prevented by the outbreak of World War I.

Milan Hodža was a close aide of Archduke Franz Ferdinand, the successor to the Austrian and Hungarian thrones, after the 1910 elections. He proposed to the Archduke a detailed plan to turn the Kingdom of Hungary into a federative monarchy, including a separate Slovak state. The Archduke hoped that federalization would strengthen the ties between the oppressed non-Magyar nations and the monarchy, but his initiative was strongly opposed by the Hungarian political elite.

During World War I, Milan Hodža was involved in the preparations for the creation of Czecho-Slovakia. He was a member of the 1918-1919 Slovak National Council and was a signatory of the Declaration of the Slovak Nation, with which the Slovaks officially joined the newly created state of Czechoslovakia in 1918.

After World War I, he became the leader of the Czechoslovak Agrarian Party in Slovakia and as such gained considerable influence over Czechoslovakia's policy in many spheres, influencing the process of land reform, the passing of bills on agrarian tolls, enforced syndicalization, administrative reforms, and the structure and policy of the government. Between the two world wars he was also a key representative of the Czechoslovak and international agrarian movement, as a founding member of the presidium of the International Agrarian Bureau, an institution of European agrarian parties.

From 1921, Milan Hodža was a professor of modern history at Comenius University in Bratislava. In the interwar period, he helped establish many Slovak newspapers and magazines and retained a strong political and ideological influence on them. His political papers were published in the book Články, reči, štúdie 1-6 (1930–1934; Articles, Speeches, Studies).

In the 1920s, he was a Czechoslovakist (considering the Czechs and Slovaks to form one nation), which enabled him to reach high posts in Prague. Nevertheless, he had frequent conflicts with Czech politicians as a result of his attempts to take into account the specific needs of Slovakia within Czechoslovakia, which was unusual at that time. Moreover, he planned the creation of a block of anti-Centrist (i.e. anti-Prague) Slovak parties. His views changed somewhat later on; in 1938 he acknowledged the full sovereignty of the Slovaks as a separate nation and in the summer of that year, before Slovakia's autonomy was proclaimed in the autumn, he included in his government programme changes to the centralist structure of Czechoslovakia, using a combination of federal, autonomist and self-administrative ideas.

In 1936-1937 he attempted to launch a project of bringing together Czechoslovakia, Austria, Romania, Hungary and Yugoslavia based on preferential duties - a step towards the unprecedented economic integration of the region. Instead, Hodža's government had to accept the Munich Agreement in 1938 and he was forced to resign under pressure. 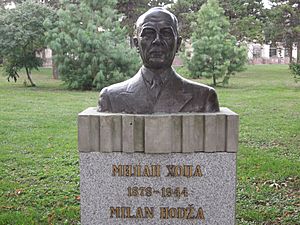 After the Munich Agreement in late 1938, he lived in exile in Switzerland, France (1939), Great Britain (1940) and after 1941 in the United States. During World War II, he was the co-author of a memorandum on the situation of Slovakia within Czechoslovakia (October 1939), in which he re-iterated his project of 1938. In November 1939, he established the 1939 Slovak National Council in Paris as the supreme body of Slovak resistance, serving as its chairman. The Slovak National Council merged with the Czech National Council to form the Czecho-Slovak National Council in January 1940. This organization (including its Czech members) competed with the government-in-exile led by Edvard Beneš (a strong Czechoslovakist) in London. The two exile groups were in permanent conflict. When Paris was conquered by the Germans, the British security forces took the members of the Czecho-Slovak National Council into custody, which was an accomplishment of spies working for the Beneš group. Hodža capitulated and he accepted a second-rate post in Beneš's State Council in November 1940. He did not participate in the activities of the State Council however, and left for the US in 1941, where he developed a project for a Central European Federation (published as the book Federation in Central Europe, 1942). Although his plan received attention from American intellectuals and officials at the United States Department of State, his plan did not materialize due to the beginning of the Cold War.

Milan Hodža held high Czechoslovak, French, Italian, Romanian, Yugoslavian and Polish awards. On 27 June 2002 his remains were reburied in the National Cemetery in Martin, in his native Slovakia.

His son was Fedor Hodža (a politician) and he was the nephew of politician and poet Michal Miloslav Hodža.

All content from Kiddle encyclopedia articles (including the article images and facts) can be freely used under Attribution-ShareAlike license, unless stated otherwise. Cite this article:
Milan Hodža Facts for Kids. Kiddle Encyclopedia.