Mitchell is an unincorporated community in Mitchell Township, Rice County, Kansas, United States. Located about 6 miles (9.7 km) east-northeast of the city of Lyons, the county seat, it lies along local roads a fraction of a mile (less than 1 km) north of U.S. Route 56. 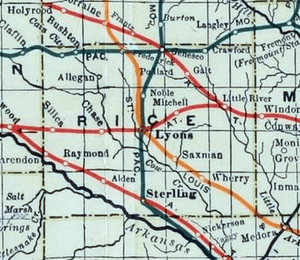 For millennia, the land now known as Kansas was inhabited by Native Americans. In 1803, most of modern Kansas was secured by the United States as part of the Louisiana Purchase. In 1854, the Kansas Territory was organized, then in 1861 Kansas became the 34th U.S. state. In 1867, Rice County was founded.

A post office was opened in Mitchell in 1882, and remained in operation until it was discontinued in 1953.

All content from Kiddle encyclopedia articles (including the article images and facts) can be freely used under Attribution-ShareAlike license, unless stated otherwise. Cite this article:
Mitchell, Kansas Facts for Kids. Kiddle Encyclopedia.