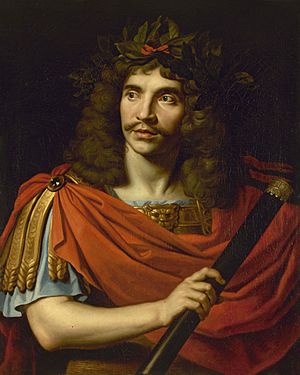 Molière was the stage name of Jean-Baptiste Poquelin. Nicolas Mignard painted this portrait in 1758 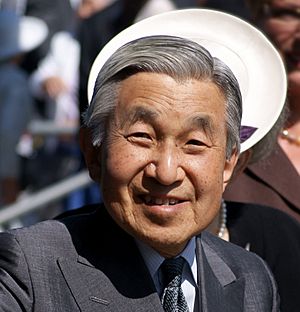 Akihito, the current Emperor of Japan, does not have a composed name.

A mononymous person is a person who is known and addressed by a single name. Such names are called mononyms. In some cases, the person was known by a composed name (polynym) before, and selected a single name. Today, this is often the case with artists, who select a stage name.

In many cultures, people only had one name. This is the case of Ancient Greece. Composed names were only used to avoid confusion. Both Zeno of Elea and Zeno of Citium were called Zeno, but the origin was added to avoid confusing the two. In Ancient Rome, people had a composed name which included a clan name and a family name, which did not change. While we refer to Cicero as Cicero, his real name was Marcus Tullius Cicero. Sometimes he is called Tully in English. Other people called Tullius include Manius Tullius Longus, a Roman consul, about 500 BC, and Quintus Tullius Cicero, one of Caesars generals. Nero was known as Nero Claudius Caesar Augustus Germanicus.

After the Romans, composed names started to be more commonplace in the Middle Ages. In the Americas, mononyms survived until the early 20th century. Examples include Pocahontas (1595-1617) and Geronimo (1829-1909). Pocahontas married and English settler, and took the name Rebecca Rolfe after her marriage.

Similarly, popes select a single name, when they are elected. The current pope is called Jorge Mario Bergoglio, but since his becoming pope, everyone has called him Pope Francis.

All content from Kiddle encyclopedia articles (including the article images and facts) can be freely used under Attribution-ShareAlike license, unless stated otherwise. Cite this article:
Mononymous person Facts for Kids. Kiddle Encyclopedia.