Montour Run is a tributary of Fishing Creek in Columbia County, Pennsylvania. It is the last named tributary to join the creek and is 3.1 miles (5.0 km) long. The stream's watershed has an area of approximately 4.7 square miles and is located in Montour Township, Columbia County and Cooper Township, Montour County. The annual load of sediment in the watershed is 4,248,000 pounds (1,927,000 kg), most of which comes from agricultural lands. Minnows live in the stream.

A. Joseph Armstrong called the stream "undistinguished" and "not an impressive stream" in his book Trout Unlimited's Guide to Pennsylvania Limestone Streams. 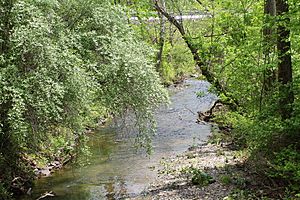 Montour Run begins in the western reaches of Montour Township, near the western edge of Columbia County. The headwaters are slightly south of U.S. Route 11 and near the community of Grovania. The stream flows east for a short distance and passes a landing strip, roughly following U.S. Route 11, before turning east-southeast and receiving an unnamed tributary from a quarry. Shortly after receiving the tributary, it turns east-northeast and then east. After a short distance, it turns northeast, continuing to follow U.S. Route 11. The stream passes through a pond and crosses under Pennsylvania Route 42 before turning east-southeast and reaching its confluence with Fishing Creek near Rupert.

Most of the streams in the watershed of Montour Run do not meet the Pennsylvania Department of Environmental Protection's water quality standards, but a tributary in the northwestern reaches of the watershed do meet the standards. 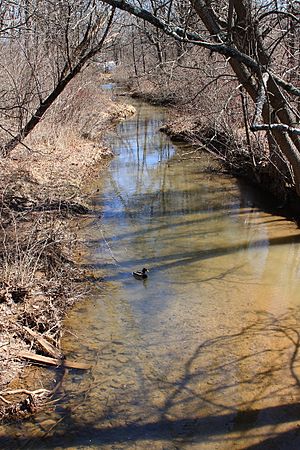 The watershed of Montour Run is located in the ridge and valley physiographic region of the Appalachian Mountains. The elevation in the watershed ranges from less than 500 feet (150 m) to more than 1,220 feet (370 m) above sea level.

50 percent of the rock in the watershed of Montour Run is shale 25 percent is sandstone, 20 percent is interbedded sedimentary rock. The remaining 5 percent is carbonate rock. The Mahantango Formation is found in the lower reaches of the Montour Run watershed, as is the Marcellus Formation. Both of these formations are from the Middle Devonian.

Montour Run is 10 feet (3.0 m) wide. The banks of the stream experience erosion. 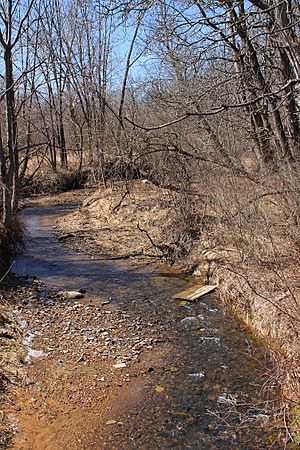 There are NWI wetlands and steep slopes on the lower reaches of Montour Run.

Montour Run is considered by the Pennsylvania Department of Environmental Protection to be a coldwater fishery. The only fish living in the stream are minnows.

The riparian buffer is limited in some places along Montour Run. Conservation farming is not practiced in the upper reaches of the watershed.

All content from Kiddle encyclopedia articles (including the article images and facts) can be freely used under Attribution-ShareAlike license, unless stated otherwise. Cite this article:
Montour Run Facts for Kids. Kiddle Encyclopedia.