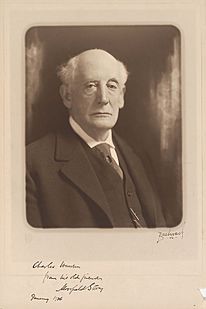 Moorfield Storey (March 19, 1845 – October 24, 1929) was an American lawyer, anti-imperial activist, and civil rights leader based in Boston, Massachusetts. According to Storey's biographer, William B. Hixson, Jr., he had a worldview that embodied "pacifism, anti-imperialism, and racial egalitarianism fully as much as it did laissez-faire and moral tone in government." Storey served as the founding president of the National Association for the Advancement of Colored People (NAACP), serving from 1909 to his death in 1929. He opposed United States expansionism beginning with the Spanish–American War.

All content from Kiddle encyclopedia articles (including the article images and facts) can be freely used under Attribution-ShareAlike license, unless stated otherwise. Cite this article:
Moorfield Storey Facts for Kids. Kiddle Encyclopedia.