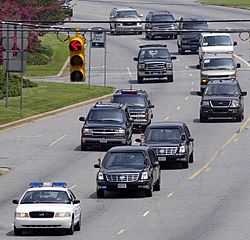 A motorcade (or convoy, carcade, autocade) is a number of vehicles driving in the same direction on official business.

Motorcades can be used to transport a very important person (VIP), usually a political figure. Such a motorcade is usually accompanied by police cars and other protection. This is to make sure the people in the motorcade are safe. For instance, motorcades for presidents often have four to six armoured cars, with police motorcycles and cars going in front and behind.

Depending on the size of the motorcade and who it is carrying, streets may be completely blocked off so no-one else can use them. This is common for the security of heads of state or government.

Motorcades can be used as protests and demonstrations. A large, organised, group of vehicles will travel a busy route at very slow speed. They do this to deliberately cause traffic disruption. This is often in relation to protest groups that have access to many large vehicles, such as truckers and farmers.

A funeral cortege is a group of mourners following a hearse in a motorcade of cars.

All content from Kiddle encyclopedia articles (including the article images and facts) can be freely used under Attribution-ShareAlike license, unless stated otherwise. Cite this article:
Motorcade Facts for Kids. Kiddle Encyclopedia.