Mount Lincoln is typically climbed from the Kite Lake Trailhead, at the end of Park County Road 8. Many climbers attempt to combine the summit of Lincoln with those of Bross and Democrat in one climb.

Silver was discovered here in 1874.

Mount Lincoln, along with its neighbors Cameron, Democrat and Bross, are pockmarked with old mines, and much of the land is owned privately by mining companies. (A large mine still operates in nearby Climax.) In the summer of 2005, these landowners denied access to the peaks by hikers and climbers, fearing liability in the case of injury, and citing the particular dangers due to the presence of old mine workings. On August 1, 2006, the town of Alma signed a deal to lease the peaks for a nominal fee, to reduce the potential liability to the owners and free up the peaks for recreational access. The opening of these peaks excludes the summit of Mount Bross since not all of the landowners have given permission for access to the area. 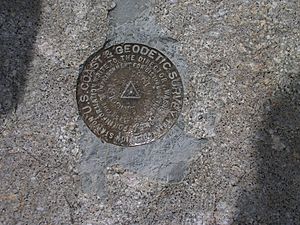 USGS Marker at the summit of Mount Lincoln.

All content from Kiddle encyclopedia articles (including the article images and facts) can be freely used under Attribution-ShareAlike license, unless stated otherwise. Cite this article:
Mount Lincoln (Colorado) Facts for Kids. Kiddle Encyclopedia.