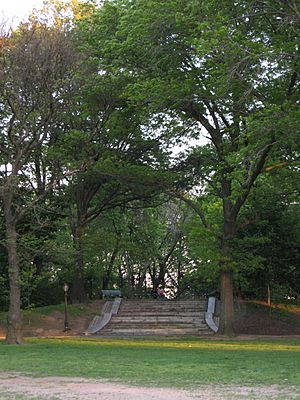 The lookout in Mount Prospect Park 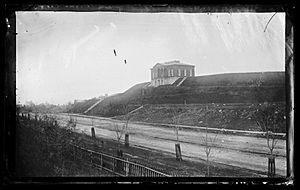 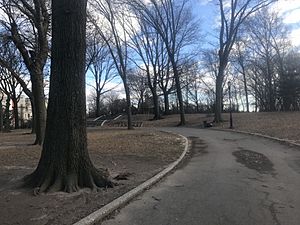 Until the 19th century, the site had sweeping views of Manhattan, Brooklyn, and parts of New Jersey and Staten Island to the west, the Atlantic Ocean to the south, and Long Island to the east. Mount Prospect Park was named for these views. Peak elevation is 200 feet (61 m) above sea level. It was a lookout point for Continental Army troops defending the Heights of Guan in 1776. The Battle of Long Island (sometimes called Battle of Brooklyn) was fought nearby.

In 1856, the then City of Brooklyn built a reservoir atop Mt. Prospect, soon to be supplemented by the larger Ridgewood Reservoir. In 1860, Mt. Prospect was to be included in the city's ambitious new Prospect Park, to be designed by Calvert Vaux and Frederick Law Olmsted, who were in the process of designing the more famous Central Park for New York City. The designers felt that the fact that Flatbush Avenue, the main roadway from Brooklyn to Flatbush, would cut through the park meant that the eastern portion of potential parkland including Mt. Prospect should not be included.

Brooklyn City kept control of the land, which then passed to the City of Greater New York in 1898. Various plans were made for the rejected parkland, including its division into city streets and lots. The major portion of the land became Institute Park, a private park, which was developed into today's Brooklyn Botanic Garden, still a private institution. The botanic garden opened in 1911.

The City retained the reservoir at Mount Prospect until it was deemed obsolete due to the shifting of the New York City water supply system to sources in Upstate New York. A water tunnel completed in 1936 rendered the Mount Prospect reservoir unnecessary and the Department of Water Supply, Gas and Electricity gave the site to the Park Department. Demolition of the reservoir began in 1938. The park was dedicated on May 27, 1939.

All content from Kiddle encyclopedia articles (including the article images and facts) can be freely used under Attribution-ShareAlike license, unless stated otherwise. Cite this article:
Mount Prospect Park Facts for Kids. Kiddle Encyclopedia.