Mountain City is a town in, and the county seat of Johnson County, Tennessee, United States. The population was 2,383 at the 2000 census and 2,531 at the 2010 census. It is the northeasternmost county seat in Tennessee. In addition, at an elevation of 2,418 feet (737 m), it has the distinction of being the highest incorporated city in the state.

When the first Euro-American explorers arrived in what is now the Mountain City area in the late 17th century, well-worn Native American trails passed through the area. In 1949, workers at the Maymead quarry (just south of Mountain City) discovered a cave with several early Mississippian-era (ca. 1000 A.D.) burials inside. The Needham and Arthur expedition of 1673 is believed to have passed through the area, making use of the gap at Trade to the south. Explorer Daniel Boone made use of the same gap on an expedition to what is now Kentucky in 1769, and today part of the Daniel Boone Heritage Trail— which follows Boone's route— passes through Mountain City.

The first permanent Euro-American settlers arrived in the Mountain City area in the late 18th century, among them Leonard Shoun and Revolutionary War veteran Alexander Doran. The area was initially part of Carter County, but the difficulty of reaching Elizabethton (the county seat) led to the creation of Johnson County in 1836. That year, a county seat for the new county was platted on land purchased from William Vaught, and named Taylorsville after Colonel James P. Taylor. The name of the town was changed to "Mountain City" in 1885, presumably at the urging of Roderick R. Butler (1827–1902), a prominent citizen and U.S. Congressman, who wanted the town's name to reflect its situation amidst one of the highest valleys in Tennessee. Butler's mansion, now listed on the National Register of Historic Places, still stands near the center of the town.

In May 1925, Mountain City was the site of a musical gathering, the first Mountain City Fiddlers Convention, that is considered a landmark event in the modern history of Appalachian traditional music. The convention contributed significantly to the development of country music, and is commemorated every summer, at the Old Time Fiddler's Convention in nearby Laurel Bloomery. 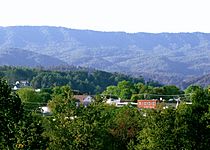 Tennessee's lowest temperature on record was reported in Mountain City on December 30, 1917, at −32 °F (−36 °C). Mountain City has an oceanic climate (Cfb) with monthly averages ranging from 35.2 to 70.2 degrees Fahrenheit in December and July, respectively.

Mountain City is the location of the Johnson County Welcome Center & Museum. The Center offers tourism information about the county and the museum showcases the history of the area and has a large collection of Native American and pioneer objects.

The Steve Earle song "Copperhead Road" is set in the vicinity of Mountain City.

All content from Kiddle encyclopedia articles (including the article images and facts) can be freely used under Attribution-ShareAlike license, unless stated otherwise. Cite this article:
Mountain City, Tennessee Facts for Kids. Kiddle Encyclopedia.