Mountain Green is a census-designated place in Morgan County, Utah, United States. The population was 2,309 at the 2010 census. Located 16 miles (26 km) up the Weber River from Ogden, Mountain Green is the world headquarters of the Browning Arms Company.

Mountain Green lies in Morgan Valley at the east end of lower Weber Canyon, just north of I-84 at the interchange with Utah State Route 167 (Trappers Loop). The community is located in the northwest corner of Morgan County, and includes the lowest point in the county.

The present-day site of Mountain Green was the location of a historic meeting of three groups of mountain men in May 1825. Peter Skene Ogden, leading 58 trappers from the British Hudson's Bay Company, camped here on May 22, 1825. The next day, 25 American Rocky Mountain Fur Company trappers belonging to John Henry Weber's "brigade" arrived under the command of Johnson Gardner. Étienne Provost was also encamped in the area, with his own company of 15.

This encounter led to a territorial dispute. Gardner and his men claimed the Hudson's Bay Company trappers were violating United States soil, while Ogden insisted the area was jointly controlled by the U.S. and the United Kingdom. Provost, who remained neutral in the argument, was in fact the only one with a valid claim. The Adams–Onís Treaty had recognized Spain's rights to the territory in 1819. Control had then passed to newly independent Mexico, whose government had granted Provost a license for his activities in the region.

An advantage held by the Americans in their debate with the British was that they were on their way to Henrys Fork (Green River) about 120 miles to the east for the first of what was to be sixteen Rocky Mountain Rendezvous. For some twenty years many of the American trappers and mountain men had traveled as much as 2,000 miles to transport their furs and hides to markets in St. Louis. For the Spanish, Santa Fe was a common destination. Now the whiskey and supplies would be nearby.

On May 24, 1825 Gardner personally ordered Ogden and his men to leave, but Ogden refused. Gardner offered higher wages and low prices to any trapper who would join the Americans. Several men who had previously deserted encouraged others to come along. In the end 23 Hudson's Bay Company trappers deserted to Gardner's group, taking some 700 pelts with them. Ogden and his remaining men fled the area the next day. The site became known as Deserters Point. Today there is a rest stop there, with a historical marker. The highway which connects Mountain Green with the Ogden Valley over the ridge to the north is named Trappers Loop.

When Mormon pioneers began to arrive in Morgan County in the 1850s, they found a man named Ben Simon already in possession of the land in the Mountain Green area. The Mexican government had granted Simon the use of this land for grazing cattle, sometime before the 1848 Treaty of Guadalupe Hidalgo. He and his brother James had apparently been trading with the Shoshone in the vicinity for some 20 years. Such early settlers as George W. Higley and Gordon Beckstead moved to Mountain Green in the 1850s with permission from the Simons and the Native Americans. The settlement was named Mountain Green due to its abundant green grass. In 1877 the population was about 150, but a number of families left in fear of conflict with the Indians, and the 1880 census showed only 75 residents.

Around 1960 the Ogden-based Browning Arms Company found the need for a rural test-firing facility. They purchased a Mountain Green farm in 1961, and by 1968 Browning had relocated its executive offices, research and development, sales and data processing to the Morgan County location. 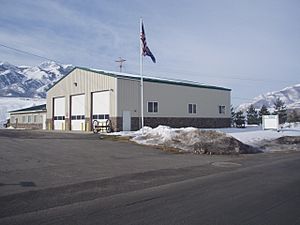 A volunteer fire department called the Mountain Green Fire District was established here in July 1971. It was started due to a perceived need for faster response times than the county fire station some 10 miles (16 km) away in Morgan could provide. A separate fire station was built in 1973. In 1997, the Insurance Services Office evaluated the Mountain Green Fire District and gave it a Fire Suppression Rating Schedule rating of class 6, equal to the grade of the Morgan Fire Department.

Mountain Green has remained unincorporated and largely undeveloped, but it is growing quickly. In 2007 the northern Utah section of the American Institute of Architects offered a design assistance team to develop guidelines for a new Mountain Green town center.

As an unincorporated community, Mountain Green lacks official boundaries, so population estimates vary. An informal estimate in 2003 gave the population as 4,000, approximately half the total Morgan County population.

All content from Kiddle encyclopedia articles (including the article images and facts) can be freely used under Attribution-ShareAlike license, unless stated otherwise. Cite this article:
Mountain Green, Utah Facts for Kids. Kiddle Encyclopedia.