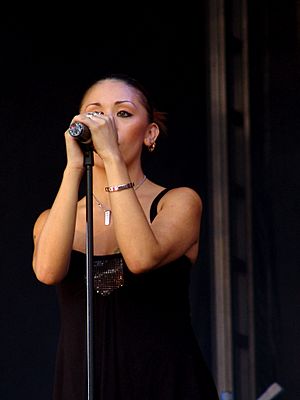 Rosa Isabel Mutya Buena (born 21 May 1985) is an English singer. She is best known for being a member of the Sugababes.

Buena was born in Kingsbury, London to a Filipino father and Irish mother.

Buena became famous as a member of girl group Sugababes in 2000. The band released three studio albums with Buena as a member. She left the band in 2005. In 2007 Buena released an album on her own called Real Girl. It reached number ten in the UK Albums Chart. Five songs from the album were released as singles. The album's first single, "Real Girl", reached number two in the UK Singles Chart. "Song 4 Mutya" was released as the second single. In 2008 the record label that released the album dropped Buena because the album did not sell as many copies as they hoped. On 2 January 2009, Buena entered Celebrity Big Brother 6 as a housemate. On 16 January 2009 Buena chose to leave the Big Brother House. In 2010 Buena said that she did not want to be a musician anymore and that she was training to become a child psychologist. In 2011 Buena started a new band called Mutya Keisha Siobhan with Keisha Buchanan and Siobhán Donaghy. They released their first single "Flatline" in 2013.

In March 2005 Buena gave birth to a daughter called Tahlia.

All content from Kiddle encyclopedia articles (including the article images and facts) can be freely used under Attribution-ShareAlike license, unless stated otherwise. Cite this article:
Mutya Buena Facts for Kids. Kiddle Encyclopedia.