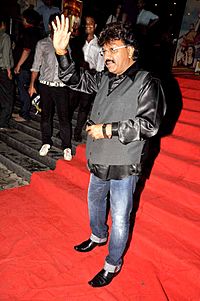 Nadeem-Shravan are a music director duo of Bollywood, a movie industry in India. The duo is made of Nadeem Saifi and Shravan Rathod.

They started their career in the late 80s. Their first big success came in 1990 with the musical film Aashiqui. Since then they have composed music for over 50 movies.

They have won four Filmfare Awards, one Star Screen Award and a Zee Cine Award in the category for Best Music Director.

All content from Kiddle encyclopedia articles (including the article images and facts) can be freely used under Attribution-ShareAlike license, unless stated otherwise. Cite this article:
Nadeem-Shravan Facts for Kids. Kiddle Encyclopedia.