The National Capital Parks is an official unit of the National Park System of the United States. It encompasses a variety of federally owned properties in and around the District of Columbia including memorials, monuments, parks, interiors of traffic circles and squares, triangles formed by irregular intersections, and other open spaces.

Selection of the Site and Design of the City 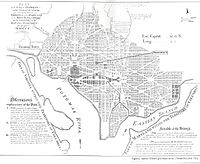 A contemporary reprint of Samuel Hill's 1792 print of Ellicott's "Plan of the City of Washington in the Territory of Columbia", published in "Massachusetts Magazine", Boston, May 1792, showing street names, lot numbers, coordinates and legends.

In 1790, Congress, through the Residence Act, authorized President George Washington to procure an area along the Potomac River to locate a new capital for the nation. In 1791, President Washington appointed Pierre Charles L'Enfant to design what would become the City of Washington under the supervision of three Commissioners appointed to oversee the development of what would become the District of Columbia. L’Enfant’s plan was ultimately modified by Andrew Ellicott when he ended in a dispute with the commissioners and Washington ultimately dismissed him. The design created many of the spaces which would ultimately become the National Capital Parks.

The original lands of the National Capital Parks were acquired pursuant to Congress' authorization with the Residence Act of 1790. Under this authority, between 1790 and 1867, The Mall, Monument Grounds, Capitol Grounds, President's Park, Lafayette Park, Franklin Park, Garfield Park and a total of 301 separate reservations in the original City of Washington were acquired as public properties. Much of this land remains Federal property today and is part of the National Capital Parks.

During the American Civil War, 1861–1865, the Union Army built a ring of fortifications to protect the city. These fortifications resulted in additional property becoming federally owned. In 1924, Congress created the National Capital Park Commission to acquire land in the District for the purpose of creating and preserving the sites of the Civil War fortifications and interconnecting parkways.

In 1926, Congress passed legislation to create a system of parks out of the Civil War fortifications, which allowed acquisition of additional property to provide an interconnecting roadway as a parkway ring around the city. This is known today as the Fort Circle Parks. Although the roadway was never built, the property remains today in Federal hands.

In 1975, Baltimore–Washington Parkway was incorporated into the unit.

All content from Kiddle encyclopedia articles (including the article images and facts) can be freely used under Attribution-ShareAlike license, unless stated otherwise. Cite this article:
National Capital Parks Facts for Kids. Kiddle Encyclopedia.