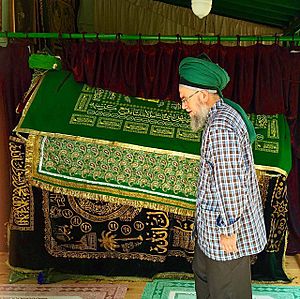 Shaykh Mehmet Adil at the Türbe of Shaykh Nazim in his Dargah at Lefka, Cyprus

Mehmet Nâzım Adil (Arabic: محمد ناظم الحقاني‎code: ar is deprecated ; April 21, 1922 – May 7, 2014) or Muhammad Nazim Adil al-Qubrusi al-Haqqani (Turkish: Nazım Kıbrısi), often called Shaykh Nazim, was a Turkish-Cypriot Sufi Sheikh. He was the leader of the Naqshbandi-Haqqani Order. Al-Haqqani predicted many events, all were not true. He was also a poet. He was born in Larnaca, Cyprus.

Nazim al-Haqqani died at the age of 92 in Northern Cyprus from multiple organ failure.

All content from Kiddle encyclopedia articles (including the article images and facts) can be freely used under Attribution-ShareAlike license, unless stated otherwise. Cite this article:
Nazim Al-Haqqani Facts for Kids. Kiddle Encyclopedia.