Khālid ibn al-Walīd ibn al-Mughīrah al-Makhzūmī (585–642), commonly known as simply Khalid ibn al-Walīd, was an army commander under Abu Bakr and Umar ibn Khattab. It was under his military leadership that Arabia, for the first time in history, was united under a single political entity, the Caliphate.

Khalid ibn al-Walid (Khalid son of al-Walid) was from the Meccan tribe of Quraysh, from a clan that initially opposed Muhammad. He played a vital role in the Meccan victory at the Battle of Uhud against the Muslims.

He converted to Islam, and joined Muhammad after the Treaty of Hudaybiyyah and participated in various expeditions for him, such as the Battle of Mu'tah, which was the first battle between the Romans and the Muslims. Khalid ibn Al-Walid reported that the fighting was so intense, that while fighting, he broke nine swords in the battle. This earned him the title ‘Saif-ullah' meaning "The Sword of Allah" 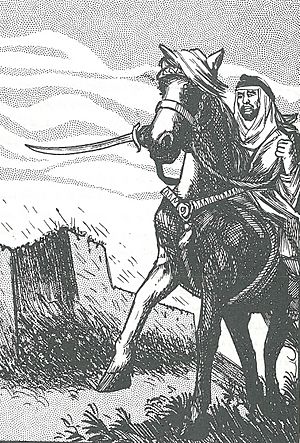 He captured the Sassanid Arab client Kingdom of Al-Hirah, and defeated the Sassanid Persian forces during his conquest of Iraq (Mesopotamia). He was later transferred to the western front to capture Roman Syria and the Byzantine Arab client state of the Ghassanids.

Although Umar later relieved him of high command, he nevertheless remained the effective leader of the forces against the Byzantines during the early stages of the Byzantine–Arab Wars. Under his command, Damascus was captured in 634 and the key Arab victory against the Byzantine forces was achieved at the Battle of Yarmouk (636), which led to the conquest of the Bilad al-Sham. In 638, he was dismissed from military services.

Khalid fought around 200 battles, both major battles and minor skirmishes as well as single duels, during his military career. Having remained undefeated, he is considered by some scholars to be one of the finest military generals in history. 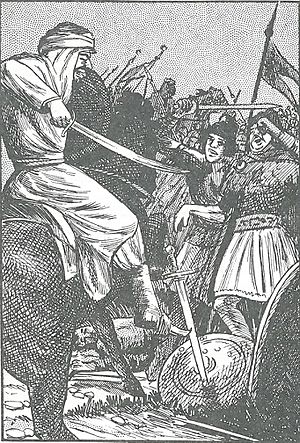 Khalid was born c. 585 in Mecca. His father was Walid ibn al-Mughirah, Sheikh of the Banu Makhzum, a clan of the Arab tribe of Quraysh. Khalid's mother was Lubabah al-Sughra bint al-Harith. Soon after his birth, in accordance with the traditions of the Quraysh, Khalid was sent to a Bedouin tribe in the desert, where a foster mother nursed him and brought him up in the clear, dry and unpolluted air of the desert. At the age of five or six, he returned to his parents in Mecca. During his childhood Khalid suffered a mild attack of smallpox, which he survived, but it left some pockmarks on his left cheek.

The three leading clans of Quraysh at that time were Banu Hashim, Banu Abd ad-Dar and Banu Makhzum, the latter clan being responsible for the matters of warfare. As a member of the Makhzum clan, who were amongst the best horsemen in Arabia, Khalid learned to ride and use such weapons as the spear, the lance, the bow and the sword. The lance was said to be his favorite among the weapons. In youth he was admired as a renowned warrior and wrestler among the Quraysh. Khalid was a cousin of Umar ibn Khattab. 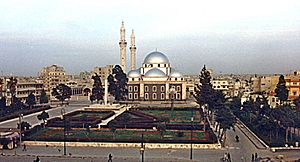 Within less than four years of his dismissal, Khalid died and was buried in 642 in Emesa, where he lived since his dismissal from military services. His tomb is now part of a mosque called Khalid ibn al-Walid Mosque. Khalid's tombstone depicts a list of over 50 victorious battles that he commanded without defeat (not including small battles).

It is said that he had wanted to die as a martyr in the field of battle, and was apparently disappointed when he knew that he would die in bed.

All content from Kiddle encyclopedia articles (including the article images and facts) can be freely used under Attribution-ShareAlike license, unless stated otherwise. Cite this article:
Khalid ibn al-Walid Facts for Kids. Kiddle Encyclopedia.