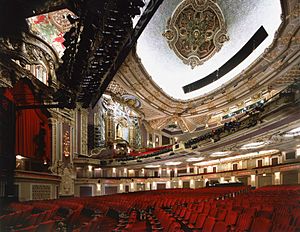 The James M. Nederlander Theatre is a theater located at 24 West Randolph Street in the Loop area of downtown Chicago, Illinois. The venue opened in 1926 as the Oriental Theatre, a deluxe movie palace and vaudeville venue. Today the Nederlander presents live Broadway theater and is operated by Broadway In Chicago, currently seating 2,253.

The Oriental Theater, now the James M. Nederlander Theatre, opened in 1926 as one of many ornate movie palaces built in Chicago during the 1920s by the firm Rapp and Rapp. In addition to movies, it occasionally showed live acts. The Oriental continued to be a vital part of Chicago's theater district into the 1960s, but patronage declined in the 1970s. Late in the decade, the theater survived by showing exploitation films. It closed in 1981 and its lobby was refitted as a retail TV and radio store, while the theater remained vacant for more than a decade.

The Oriental replaced an earlier theater venue on the site opened November 27, 1903, the Iroquois Theatre, which burned in the deadliest theatre fire in U.S. history. After the fire's recorded death toll reached over double the death toll of The Great Chicago Fire, city officials closed all theaters in the city for inspection. Following the incident, the city enacted new laws that addressed aisle-way and exit standards, scenery fireproofing, and occupancy limits.

The Oriental-Ford Center for the Arts reopened as a live theater venue in the 1990s and was renamed the Nederlander Theatre in 2019. The theater is one of several houses now operating in Chicago's revitalized Loop Theater District. According to Richard Christiansen of the Chicago Tribune, the reopening of the Oriental spurred the restoration of other theaters in The Loop. The district is also home to the Cadillac Palace Theatre, CIBC Theatre, the Goodman Theatre, and the Chicago Theatre. Randolph Street was traditionally the center of downtown Chicago's entertainment district until the 1970s when the area began to decline. The now demolished United Artists Theatre, Woods Theatre, Garrick Theater (originally constructed as the Schiller Theater and Building), State-Lake Theatre, Erlanger and Roosevelt Theatre were located near the intersection of Randolph and State Streets.

On November 13, 2018, Broadway In Chicago announced that the theater would be renamed to honor James M. Nederlander, founder of Broadway In Chicago, Broadway theater owner and producer, and champion of Chicago’s Downtown Theater District, who died in 2016. The venue unveiled its newly renovated marquee, vertical blade sign and signage as the James M. Nederlander Theatre on February 8, 2019. 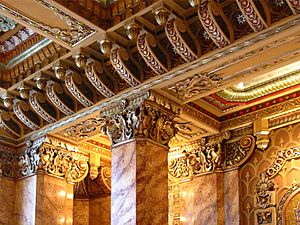 On January 10, 1996, Canadian theatrical company Livent announced it acquired the property and would renovate the structure with an anticipated completion date of 1998. The city of Chicago pledged $13.5 million toward the restoration and Ford Motor Company entered into a sponsorship agreement with Livent for a reported $1 million annual fee.

In November 1998, Livent filed for Chapter 11 bankruptcy protection in the U.S. and the Bankruptcy Court approved the sale of its assets to SFX Entertainment.

During the restoration, architect Daniel P. Coffey created a design plan that would increase the theater's backstage area by gutting the adjacent Oliver Building while preserving one-third of its original steel structure, as well as the building's Dearborn façade and a portion of its alley façade.

SFX's corporate successor, Live Nation, sold the venue to the Nederlander Organization in 2007.

In 2015, a developer purchased the adjacent 22-story office building with the intent of converting the space into 230 apartments. However, the plan quickly changed to a 198-room hotel which opened in 2017. During the renovation, workers on the fourteenth floor removed a false ceiling and discovered a long-forgotten Masonic meeting space. The developer preserved parts of the original architecture and renovated the space into a spiegeltent which opened in Spring 2019.

The venue presented both movies and vaudeville acts during its early years, but by the 1930s it became predominantly a movie house, though live performances and concerts continued. Duke Ellington and his orchestra made frequent appearances at the Nederlander.

In October 1934, 12-year-old Frances Gumm and her sisters performed at the theater but received laughs when George Jessel would introduce them as The Gumm Sisters. At his urging, they changed their name to The Garland Sisters after his friend, Robert Garland, critic for The New York Times. Frances Garland would later change her first name, to become Judy Garland. 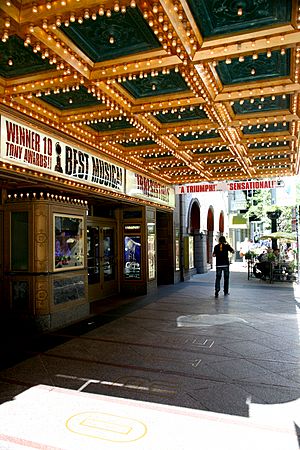 The theater re-opened in 1998 with the Chicago premiere of the musical Ragtime. From June 2005 through January 2009, the theater housed a sit-down production of Wicked, making it the most popular stage production in Chicago history. Wicked exceeded expectations, according to producer David Stone: "To be honest, we thought it would run eighteen months, then we'd spend a year in Los Angeles and six months in San Francisco."

The venue hosted the pre-Broadway run of The Addams Family, starring Nathan Lane and Bebe Neuwirth from November 13, 2009 through January 10, 2010, and a production of the 2009 Tony Award winner for Best Musical Billy Elliot starring Cesar Corrales as Billy from March 18 to November 28, 2010. The theatre also hosted the pre-Broadway runs of On Your Feet! June 2 through July 15, 2015 and SpongeBob SquarePants from June 7 to July 10, 2016.

The Cher Show, a so-called "bio-musical" of Cher's life and music, opened June 12, 2018, for a five-week run before moving to New York's Neil Simon Theatre in the fall.

In March 2019, James L. Nederlander announced that a musical based on the songs of Britney Spears Once Upon a One More Time would premiere at the venue October 29 and run until December 1 when it will move to New York. In January, the Michael Jackson Estate and Columbia Live Stage had announced that MJ: The Musical, a bio-musical of Michael Jackson would play during that period, but they instead opted to premiere in New York City.

All content from Kiddle encyclopedia articles (including the article images and facts) can be freely used under Attribution-ShareAlike license, unless stated otherwise. Cite this article:
Nederlander Theatre (Chicago) Facts for Kids. Kiddle Encyclopedia.