Nerstrand is a city in Rice County, Minnesota, United States. The population was 294 at the 2018 census. 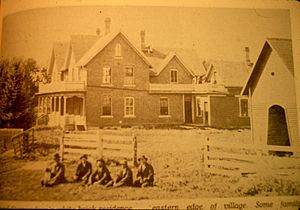 In 1856, Norwegian immigrant Osmund Osmundson moved to Wheeling Township in Rice County. He homesteaded the present site of Nerstrand, building a house and farm, and began to envision a town on the site. In 1877, he built a store on what became the right-of-way for railroad tracks on what is now Main Street. In 1885, the Minnesota and North Western Railroad (later the Chicago Great Western Railway) was constructed, extending from Lyle, Minnesota to St. Paul, and Osmundson platted the town on the line, naming it after his hometown of Nedstrand in Tysvær, Norway.

The town was the center of a significant Norwegian immigrant community, which included people in the surrounding township and county. Some, like Tosten Bonde, who lived just outside the city limits, and Osmundson became state legislators. Thorstein Veblen, who similarly grew up just outside the town, became a noted sociologist and economist.

The town incorporated in 1897 and its first city hall, built in the same year. It proved too small within a few years, and a new city hall was built in 1907. The Nerstrand City Hall building was placed on the National Register of Historic Places on April 6, 1982 alongside the Osmund Osmundson House and Tosten Bonde's farmhouse. The Thorstein Veblen Farmstead became a National Historic Landmark. The railroad tracks have since been removed.

According to the United States Census Bureau, the city has a total area of 1.42 square miles (3.68 km2), all of it land. The town features an elementary school with grades K-5, which is operated as a charter school under state law. There is also a highly rated volunteer fire department.

Nerstrand-Big Woods State Park is located nearby. The Valley Grove Church Building, located nearby, is considered an important historical site, though there are several active churches around the area that are better preserved:

The town was notorious for the nearby Nerstrand Hill, bane of the locomotive engineer, with the steepest grade on the line from St. Paul to Manley Junction, Iowa.

There were 108 households, of which 40.7% had children under the age of 18 living with them, 73.1% were married couples living together, 6.5% had a female householder with no husband present, 4.6% had a male householder with no wife present, and 15.7% were non-families. 12.0% of all households were made up of individuals, and 3.7% had someone living alone who was 65 years of age or older. The average household size was 2.73 and the average family size was 2.96.

Thorstein Veblen (1857–1929), usually characterized as an economist or sociologist, and best known for his book The Theory of the Leisure Class (ISBN: 0-14-018795-2), lived about a mile northeast of town. His house and farm, the Thorstein Veblen Farmstead, contained several innovations, including what is believed to be the first bucket elevator installed on a farm in Rice County. The Thorstein Veblen Farmstead was renovated in 1994 as a historic site and is occasionally open to the public. As of September 2016 it is a flower farm.

Throughout its history, Nerstrand has been a source of services to area farmers. A full-service grain elevator still operates today and provides over half the employment in Nerstrand.

The business district declined with the advent of the automobile, with most area residents choosing to shop in Northfield, which has always been more prominent because of its two colleges, or Faribault, the county seat.

As businesses left, Nerstrand became more of a bedroom community for people working in Northfield, Faribault, or Kenyon. A few nonretail businesses, including a cabinet shop and two specialty construction firms, have come to the community, occupying what would otherwise be vacant storefronts.

All content from Kiddle encyclopedia articles (including the article images and facts) can be freely used under Attribution-ShareAlike license, unless stated otherwise. Cite this article:
Nerstrand, Minnesota Facts for Kids. Kiddle Encyclopedia.