New Rochelle /rəˈʃɛl/ is a city in Westchester County, New York, United States, in the southeastern portion of the state.

In 2007, the city had a population of 73,260, making it the seventh-largest in the state of New York. As of the 2010 Census, the city's population had increased to 77,062. In November 2008 Business Week magazine listed New Rochelle as the best city in New York State, and one of the best places nationally, to raise children. In 2014, New Rochelle was voted the 13th best city to live in, out of 550 cities, and was the only city in Westchester County on the list.

The European settlement was started by refugee Huguenots (French Protestants) in 1688, who were fleeing religious persecution in France (such as dragonnade) after the revocation by the king of the Edict of Nantes. Many of the settlers were artisans and craftsmen from the city of La Rochelle, France, thus influencing the choice of the name of "New Rochelle". 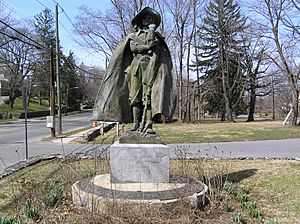 Some 33 families established the community of la Nouvelle-Rochelle in 1688. A monument containing the names of these settlers stands in Hudson Park, the original landing point of the Huguenots. Thirty-one years earlier, the Siwanoy Indians, a band of Algonquian-speaking Lenape (also known as the Delaware by English colonists) sold their land to Thomas Pell. In 1689 Pell officially deeded 6,100 acres (25 km2) for the establishment of a Huguenot community. Jacob Leisler is an important figure in the early histories of both New Rochelle and the nation. He arrived in America as a mercenary in the British army and later became one of the most prominent merchants in New York. He was subsequently appointed acting-governor of the province, and it was during this time that he acted on behalf of the Huguenots.

Of all the Huguenot settlements in America founded with the intention of being distinctly French colonies, New Rochelle most clearly conformed to the plans of its founders. The colony continued to attract French refugees until as late as 1760. The choice of name for the city reflected the importance of the city of La Rochelle and of the new settlement in Huguenot history and distinctly French character of the community. French was spoken, and it was common practice for people in neighboring areas to send their children to New Rochelle to learn the language.

In 1775, General George Washington stopped in New Rochelle on his way to assume command of the Army of the United Colonies in Massachusetts. The British Army briefly occupied sections of New Rochelle and Larchmont in 1776. Following British victory in the Battle of White Plains, New Rochelle became part of a "Neutral Ground" for General Washington to regroup his troops. After the Revolutionary War ended in 1784, patriot Thomas Paine was given a farm in New Rochelle for his service to the cause of independence. The farm, totaling about 300 acres (1.2 km2), had been confiscated from its owners by state of New York due to their Tory activities.

The first national census of 1790 shows New Rochelle with 692 residents. 136 were African American, including 36 who were freemen and the remainder slaves.

Through the 18th century, New Rochelle had remained a modest village that retained an abundance of agricultural land. During the 19th century, however, New York City was a destination from the mid-century on by waves of immigration, principally from Ireland and Germany. More established American families left New York City and moved into this area. Although the original Huguenot population was rapidly shrinking in relative size, through ownership of land, businesses, banks, and small manufactures, they retained a predominant hold on the political and social life of the town.

The 1820 Census showed 150 African-Americans residing in New Rochelle, six of whom were still slaves. The state had abolished slavery with by a gradual plan; children of slave mothers were born free and all slaves were freed by 1827. 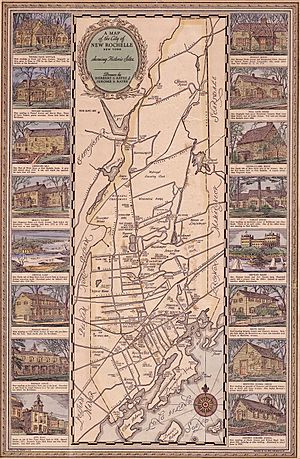 By 1900 New Rochelle had a population of 14,720. Throughout the city, farms, estates, and wooded homesteads were bought up by realty and development companies. Planned residential neighborhoods such as Rochelle Park, one of the first planned communities in the country, soon spread across the city, earning New Rochelle the sobriquet "City of Homes". In 1909, Edwin Thanhouser established Thanhouser Film Corporation. Thanhouser's Million Dollar Mystery was one of the first serial motion pictures. In 1923, New Rochelle resident Anna Jones became the first African-American woman to be admitted to the New York State Bar.

Poet and resident James J. Montague captured the image of New Rochelle in his 1926 poem "Queen City of the Sound".:

No stern and rock bound coast is here,

But, peaceful and at ease

Beside the spreading trees.

Afar from din of marts and mills

Among the placid, green clad hills

When Nature, seeking upon men

To cast a magic spell,

She looked the world around – and then

In 1930, New Rochelle recorded a population of 54,000, up from 36,213 only ten years earlier. During the 1930s, New Rochelle was the wealthiest city per capita in New York state and the third wealthiest in the country.

By the end of the century, the Metro North railroad station was rebuilt along with a $190 million entertainment complex, nicknamed New Roc City, which features a 19-screen movie theater, an IMAX theater, an indoor ice-hockey arena, mini-golf, go karts, an arcade, restaurants, a hotel, loft-apartments and a mega supermarket. The complex was built on the site of the former New Rochelle Mall, which had opened in 1968.

In 2014, New Rechelle's planning board approved $149 million in developments to three major sections of the city. The developments include restaurants, stores, hotels, an entertainment area, theaters and a mixed-use waterfront area, and are expected to be completed within 10 years.

New Rochelle is located at the southeastern point of continental New York State. It lies on the Long Island Sound, bordered on the west by Pelham, Pelham Manor and Eastchester, by Scarsdale to the north and east, and Mamaroneck and Larchmont to the east. The city lies 2 miles (3.2 km) north of the New York City border (Pelham Bay Park in The Bronx). According to the United States Census Bureau, the city has a total area of 13.2 square miles (34.3 km2). The city has a rough triangle shape, approximately 10 miles (16 km) from north to south and 1.5 miles (2 km) from east to west at its widest point.

New Rochelle is commonly referred to as the Home Town because of the significant amount of single-family, residential development that exists throughout most of the city. While the formerly industrial downtown section is more densely developed, with condominiums, high rises, offices, shopping centers, affordable housing complexes, a medical center, nursing homes, two college campuses and an inter modal transportation hub, the rest of the city consists of sprawling, residential neighborhoods. There are more than 11,500 single family units within the city, more than that of neighboring Larchmont, Mamaroneck and Scarsdale combined. The total number of separate households surpasses 26,000, more than that of neighboring Pelham, Pelham Manor, Eastchester, Scarsdale, Mamaroneck and Larchmont combined.

Some of the country's most expensive real estate can be found in New Rochelle. The north end of the city (10804) is ranked in Forbes magazine's list of the '500 most expensive zip-codes' in the country. According to the list, the average household income was $199,061 and the average home price was over $752,000. Homes in Premium Point, a gated section of the city on Long Island Sound, are priced anywhere from $2 to $20 million. The three newest residential developments, 'Kensington Woods', 'The Greens at Cherry Lawn' and 'Riviera Shores', are all gated communities with single family homes priced from $2 million. With a population approaching 80,000 residents, New York State law dictates that the city provide an adequate amount of affordable housing units. New Rochelle has historically met and surpassed state requirements. It is working to replace the existing Weyman Avenue Projects with more community-centered, townhouse-style housing units. By embracing the needs of the poor, New Rochelle sets a precedent for other suburban communities to follow. Neighboring towns, including Mamaroneck, Larchmont and Scarsdale, have failed to meet the minimal affordable housing requirements set by the state. Popular consensus is that the presence of the poor precludes that of the middle-class and the wealthy. Considering the large number of working-class and affordable housing units found 'Downtown', the high property values prevalent throughout most of the city reflects the true economic diversity of New Rochelle. It is home to a range of families, from the financially disadvantaged to the very wealthy. One of 'the wealthiest people in the United States,' according to Forbes magazine, was longtime New Rochelle resident and businessman Sidney Frank. 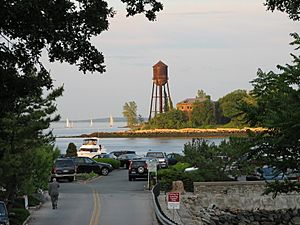 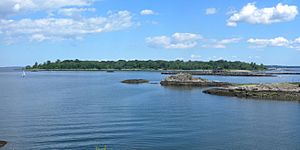 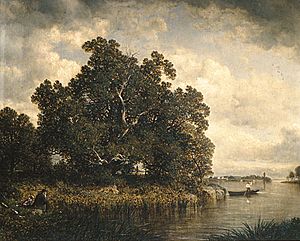 The shoreline within the City of New Rochelle measures 2.7 miles (4.3 km), but due to many irregularities and off-shore islands, the actual length of the waterfront is 9.3 miles (15.0 km). The unusual coastal features have over the years earned it the nickname, "the Queen City of the Sound."

Major highways include Interstate 95 and the Hutchinson River Parkway. Interstate 95 serves as the main route through New Rochelle with four exits directly serving the city. The Hutchinson River Parkway, which is designated for passenger vehicles only, runs through much of the city. Substantial congestion on the parkway occurs in both directions during the morning and evening rush-hour.

The Boston Post Road, also known as Main Street in downtown New Rochelle, is used as a major artery during the morning and evening commute. Most traffic via the Post Road is short distance or fairly local, yet vehicles have utilized Route 1 during times of heavy congestion on I-95 as a re-route.

The city has a commuter railroad station served by Metro North and Amtrak.

By 1848, the New York & New Haven opened their line along Long Island Sound. After the Civil War, proposals for new railroads reached new levels. Banking that the city would continue to grow northward, the New York, Westchester and Boston Railway Company was established to serve the large populations moving to the suburbs. Two main lines were built as part of the NYW&B; the Port Chester line and the White Plains line. While the populations of some communities served by the NYW&B did grow between 1912 and 1937, the growth was not sufficient or fast enough to provide adequate business for the railroad, and service was discontinued on December 31, 1937.

New Rochelle in media and fiction

New Rochelle's 'sister city' is La Rochelle, France, a city and commune of western France with a (population 78,000 in 2004). There has been a 'friendly relationship' between the two cities since 1910.

All content from Kiddle encyclopedia articles (including the article images and facts) can be freely used under Attribution-ShareAlike license, unless stated otherwise. Cite this article:
New Rochelle, New York Facts for Kids. Kiddle Encyclopedia.