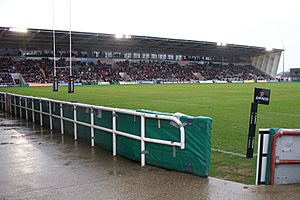 Newcastle Falcons (formerly Gosforth/Newcastle Gosforth) are a rugby club based in Newcastle, England who play in the Aviva Premiership.

The club was formed in 1877 as Gosforth Football Club and were well known for their successes in cup competition. The advent of League rugby saw their first name change to Newcastle Gosforth as well as a move to the Kingston Park stadium. At the start of the professional era the club adopted its current name of Newcastle Falcons and in 1998 they won the Premiership within a year of winning promotion from the second tier, a feat that has yet to be repeated.

All content from Kiddle encyclopedia articles (including the article images and facts) can be freely used under Attribution-ShareAlike license, unless stated otherwise. Cite this article:
Newcastle Falcons Facts for Kids. Kiddle Encyclopedia.