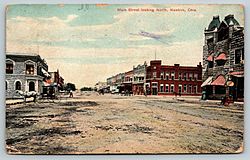 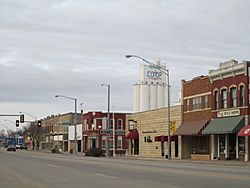 Newkirk is a city and county seat of Kay County, Oklahoma, United States. The population was 2,172 at the 2020 census. 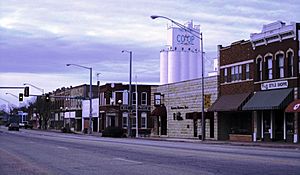 Newkirk is located on land known as the Cherokee Strip which belonged to the Cherokee Indians. In 1893, the Cherokee sold the land, then part of Oklahoma Territory to the United States government. The land was opened to White settlement by means of the Cherokee Strip Land Run on September 16, 1893. More than 100,000 people raced to claim plots of land.

The town of Newkirk had been laid out before the run by the government as the county seat of “K” county. It was named Lamoreaux after Silas W. Lamoreaux, who was commissioner of the General Land Office. Two miles north of Lamoreaux was Kirk, a Santa Fe Railroad cattle-shipping station.

That first day of the land run, 5,000 people staked claims in and near Lamoreaux. Claimants were allowed two town lots: one for a home and one for a business. In designated rural areas, claimants could select 160 acres. The population quickly dropped to about 2,100 as disappointed land seekers left. A town government was organized and among the first items of business was to change the name of the town from Lamoreaux to Santa Fe. The railroad, however, did not approve the name as several other places were named Santa Fe. Meanwhile, the railroad station at Kirk had been closed, so the name Newkirk was chosen on November 8, 1893.

In 1901, Newkirk suffered a major reversal when nearly a whole block of its thriving downtown burned. The wood buildings that burned were mostly replaced with stone buildings from the distinctive yellow limestone quarried four miles east of Newkirk. “Imposing stone buildings began to give dignity and permanence to the dusty streets, while wood-frame homes gradually replaced the “proving-up” homes of the Run. Young Elms, Cottonwoods, shrubs, and flowers began to change the once treeless prairies into shaded garden spots.” Newkirk’s business district was placed on the National Register as a historic district in 1984.

After Oklahoma became a state in 1907, Newkirk, Blackwell, and Ponca City vied to become the county seat. An election on September 3, 1908, gave Blackwell 2,038 votes, Newkirk 2,063, and Ponca City 1,388. Governor Haskell declared Newkirk as the winner. Blackwell sued, but lost, and Newkirk retained the title. The present Kay County courthouse was built in 1926, replacing the original 1894 wooden structure which had burned.

In 1992, Newkirk became the first small town to receive the Oklahoma Main Street Award. Newkirk was also the name of the town in the movie Twister, where the drive-in movie scene took place. Though it was not filmed in Newkirk, but in Guthrie, Oklahoma, the directors took the name from this town.

Newkirk's elevation is 1,152 feet (351 m). The town is on mostly flat terrain with no large watercourses nearby, and is situated at the boundary between two ecoregions: the Central Great Plains and the Flint Hills. West of the town in the Great Plains, the countryside is rich agricultural land, especially for wheat, soybeans, and cattle. East of town, the terrain in the Flint Hills is more rugged and rocky and is primarily used for cattle ranching. Natural vegetation is mostly prairie, but stream valleys often have fine forests of cottonwood, oak, elm, ash, pecan, sycamore, and other species. Scrub oak and red cedar dot many hillsides. Wildlife is abundant, including whitetail deer, turkey, bobwhite quail, coyote, bobcat, and waterfowl. A cougar attack on a person seven miles east of Newkirk was reported in 2002.

Newkirk lies 8 mi (13 km) south of the Kansas-Oklahoma border. A casino and other facilities owned by the Kaw Indian tribe are 1 mi (1.6 km) away. The Arkansas River is 6 mi (9.7 km) east of town. The bridge across the river crosses the upper end of Kaw Lake. Near the river are the Deer Creek/Bryson Paddock sites, where archaeologists have excavated the ruins of two prominent 18th-century Wichita Indian villages. Beyond the river, continuing east, is the picturesque, lightly populated, tallgrass prairie region with many large ranches. Locals call this region “The Osage” after Osage County, Oklahoma and the Osage Indians. The Washunga cemetery of the Kaw Indians is 2 mi (3.2 km) north of Newkirk. It was moved here to avoid having it covered by water when a dam created Kaw Lake. The Chilocco Indian Agricultural School, now closed, was 7 mi (11 km) north.

The climate of Newkirk can be described as extreme continental with an average low temperature in January of 20°F (-7°C) and an average high temperature in July of 92°F (33°C). Winter temperatures sometimes fall below zero (-18°C) and 100°F (38°C) days are common in summer. Average precipitation is 37 in (94 cm) per year, but highly variable. May and June are the wettest months on average and the winter months of December, January, and February are the driest. Tornados are common in the region, although Newkirk has never suffered major damage.

The local economy is primarily based on agriculture.

All content from Kiddle encyclopedia articles (including the article images and facts) can be freely used under Attribution-ShareAlike license, unless stated otherwise. Cite this article:
Newkirk, Oklahoma Facts for Kids. Kiddle Encyclopedia.