Newquay Zoo is a zoological garden located within Trenance Leisure Park in Newquay, England. The zoo was opened in Cornwall on Whit Monday, 26 May 1969 by the local council (Newquay Urban District Council, later Restormel District Council). It was privately owned by Mike Thomas and Roger Martin from 1993 until 2003. In August 2003 Stewart Muir became the new Director and the zoo became part of the Whitley Wildlife Conservation Trust, alongside Paignton Zoo and Living Coasts. The zoo is part of a registered charity, and was awarded various South West and Cornwall 'Visitor Attraction of The Year' and 'Sustainable Tourism' awards for excellence in 2006, 2007 and 2008. Newquay Zoo is now run as part of the Wild Planet Trust, the new name for the Whitley Wildlife Conservation Trust.

The zoo has been recognised for providing sustainable tourism and was one of the first few British zoos to gain an ISO 14001 certificate for its environmental management systems along with a recent Gold award for GTBS Green Tourism Business Scheme. The zoo works within the BIAZA and EAZA zoo networks in Britain and Europe but has other ex-situ conservation links overseas.

Newquay Zoo is Cornwall's largest zoo and now covers over 13 acres (53,000 m2) of land, as well as housing over 130 species. The original zoo was around 6 acres (24,000 m2). An expansion of 3.5 acres (14,000 m2) opened as an African Savanna area from Easter 2009 followed by a central new Philippines area housing endangered fishing cat, Visayan warty pig and Philippine spotted deer.

The animal collection at Newquay consists of many species, including ex-situ conservation breeding programmes for endangered red pandas, lemurs, Sulawesi crested macaques, Humboldt penguins, marmosets, tamarins and tapirs. They also look after a number of other animals including meerkats and lions. 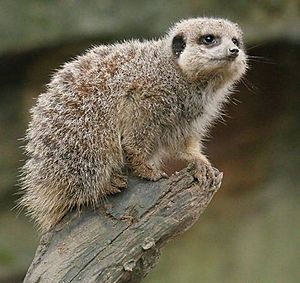 The zoo is home to part of an international breeding programme for some endangered species such as Owston's palm civet and red-fronted macaw for which an overseas in-situ conservation support programme of funding and skills exchange exists, along with support for the unau sloth project and pacarana in South America, pangolin and small carnivore conservation programme in South East Asia. The World Land Trust BIAZA zoo reserve in South America is also supported through the wild spaces scheme.

The EAZA Campaign is supported annually. Recent overseas project information can be found for each project on the zoo website. Increasingly animal species held at the zoo are listed as threatened or endangered species on the Red Data lists produced by the IUCN.

The zoo has an immersive tropical house exhibit which houses rainforest plants and animals including a sloth, tropical birds, reptiles and insects.

Newquay Zoo works with other organisations on events and educational projects such as the Charles Darwin bicentenary year events in 2009. It partnered Falmouth Art Gallery in hosting Cornish artists including John Dyer to produce material for four 2009 exhibitions at Falmouth, the port where Charles Darwin left HMS Beagle at the end of his voyage in 1836.

Some material was lent from the growing Newquay Zoo Archive of zoo historical material for these exhibitions and displays at Falmouth and Newquay Zoo.

Since 2000 Newquay Zoo has provided teaching input and practical opportunities for FE and HE students enrolled at the adjacent Newquay Centre for Applied Zoology Cornwall College Newquay on zoological conservation, education and media courses. The campus is based next to Newquay Zoo. This unusual and innovative partnership project was recognised by a BIAZA zoo education award in 2003 and 2016.

All content from Kiddle encyclopedia articles (including the article images and facts) can be freely used under Attribution-ShareAlike license, unless stated otherwise. Cite this article:
Newquay Zoo Facts for Kids. Kiddle Encyclopedia.